'My Fight Is Of Principles, Never Craved For Any Post': Sachin Pilot After Meeting Congress Leaders

'We raised issues of principles before the Congress leadership and welcome their assurance of time-bound redressal of our grievances,' Sachin Pilot said after meeting Rahul Gandhi. 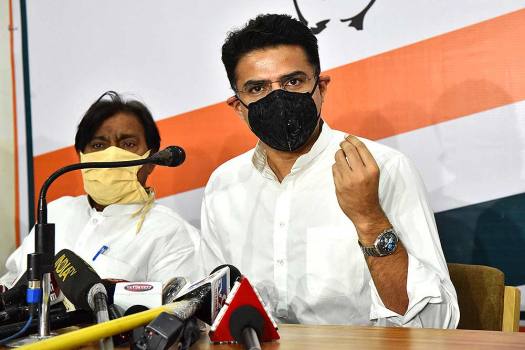 Soon after his patch-up talks with senior Congress leaders, former Rajasthan deputy chief minister Sachin Pilot on Monday night said he has never hankered after posts and his was a fight for principles.

Pilot, who made his first public appearance since he revolted against Rajasthan Chief Minister Ashok Gehlot a month ago, told reporters that he and the other MLAs raised organisational issues, the case of sedition filed by the SOG and the style of governance in the state, and expressed the hope that these will be addressed soon.

He was speaking after the rebel Congress MLAs met party leader Priyanka Gandhi Vadra and K C Venugopal and aired their grievances.

The MLAs said the issues raised were in the party's interests.

"We raised issues of principles before the Congress leadership and welcome their assurance of time-bound redressal of our grievances," Pilot told reporters.

"I don't crave for any post or hanker after any position. The party has given a position and can take it back. I wanted that the respect be maintained and those who have worked hard in the formation of Congress government in Rajasthan be rewarded accordingly," the former deputy chief minister said.

Pilot said he has worked hard for bringing the Congress to power in Rajasthan and hoped the party would fulfil its promises made to the people.

Late Monday night, he tweeted, "I thank Smt Sonia Ji, @RahulGandhi Ji, @priyankagandhi Ji & @INCIndia leaders for noting & addressing our grievances.I stand firm in my belief & will continue working for a better India, to deliver on promises made to the people of Rajasthan & protect democratic values we cherish."

After the meeting, AICC general secretary K C Venugopal said, "The Congress will go forward unitedly by mutually respecting each other and resolving concerns raised".

Pilot said some personal remarks have been made against him, but he has never used such language that hurts anyone.

"I feel there is no place for personal mudslinging in politics," he said.

The young Congress leader said all this while he did not respond to any personal remarks made against him and maintained dignity.

"We raised organisational issues, the case of sedition filed by the state SOG, the style of functioning and governance in Rajasthan," Pilot said.

"I raised my experiences of 1.5 years to the party leadership and said whatever was in the party's interest," he said.

Prior to the meeting, a three-member Committee was formed by Congress president Sonia Gandhi to address the grievances.

Sources said Priyanka Gandhi, Ahmed Patel and K C Venugopal will be part of this Committee.