Nagaland Civilian Killings: Accounts From 'Ground Zero' Piece Together How It Happened

A report released by the Eastern Naga Students' Federation has tried to dispel misinformation and fake news about the firing by security forces that led to the death of 13 civilians from Oting, Nagaland. 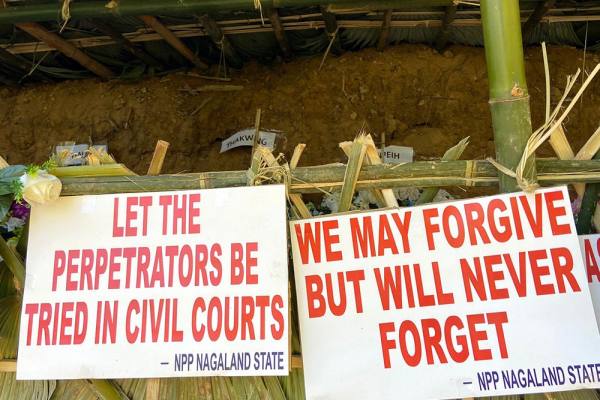 Large parts of Nagaland have been in mourning since the December 4 violence that left 13 civilians dead. According to reports, the civilians, who belonged to Oting village in Mon district, were gunned down by paramilitary forces in Tiru Valley. The incident led to protests across Nagaland, especially Mon which is largely dominated by the Konyak tribals. However, media narratives around the incident have often been confusing and even misinformative and fake.

To counter the stream of misinformation and fake news that has been spreading on social media, the Eastern Naga Students' Federation has put together a "ground zero" report based on accounts of eye-witnesses to establish what really happened in Tiru on the fateful days of December 4.

Here is what happened, as per the press release:

AFSPA In Nagaland: Memories And Mourning In Nagaland’s Cycle Of Violence

Committee To Look Into Withdrawal Of Controversial AFSPA From Nagaland

First round of firing

December 4, Saturday, the first group of villagers left from the mining site at Tiru valley on a Bolero pickup with eight coal miners, all from Oting. The remaining coal miners from the village waited to have a cup of tea before heading home. About five minutes after the departure, the remaining miners heard gunshots. The firing occurred just 200 metres from where they were waiting. However, they did not react or inquire because they could never imagine that the security forces would shoot on civilians - their own miner brothers.

When the second group tried to return through their usual short cut (the one that the victims took), they were asked by security forces to take a different, longer route. After reaching the village through the Pioneer Road at 6 pm, however, the miners realised that the first group had never arrived.

Ast he evening grew and the miners did not arrive, some of the villagers formed a search party led by the Oting Students’ Union President, Mr Keapwang Wangsha to search for the miners. Later in the night, when the search party arrived at the spot where the incident occurred, they found the Bolero with bullet holes through the windshield, aimed directly at the driver, and blood.

According to the report, security forces first tried to flee and then denied any knowledge about the missing miners. The search party, however, checked the vehicles and found six bullet-ridden bodies of their fellow villagers, covered in tarpaulin. The eyewitnesses claimed that two paramilitary officers had been sitting near the bodies along with the victims' belongings when they were discovered. "There was also an attempt to undress their clothes and dress them in combat uniforms in what looked like a sinister attempt to pass them off as militant", the note added.

Such accusations have been floated by certain entities since the firing.  BJP Mon district president Mr Nyawang reportedly called out the BJP leadership for not coming to Mon to visit the victims' families as well as Union Home Minister Amit Shah's comments about the firing in Lok Sabha after he suggested that the firing by security forces was an act of "self-defence".

Second round of firing

Enraged upon finding the bullet-riddled bodies, the Konyaks of Mon village who were part of the search party lost control and a scuffle broke out between them and the security forces which soon turned into another bloodbath. While the security forces fired indiscriminately in what the Eastern Naga Students' Federation called was an "ambush", villagers also attacked with machetes. The ensuing violence left 12 people critically injured and several died on the spot.

The villagers later found out that the paramilitary forces had dropped off two boys at the Dibrugarh Hospital claiming they were NSCN boys. It was later established that the two boys had also been injured in the firing and later died.

The Special Powers of the armed forces allows any commissioned officer, warrant officer, non-commissioned officer or any other person of equivalent rank in the armed forces to shoot indiscriminately if they think it necessary for maintaining public order.  The law has been widely criticised for giving security forces an upper hand and lack of accountability when it comes to violence against civilians in disturbed areas.

However, the ENSF report shows that the killing of the miners was not even in keeping with AFSPA sops.

According to the law, security forces have to give due warning before firing at any person who is acting in contravention of any law and order in a disturbed area. But the locals claim no such warning was given as the forces shot at the driver point-blank. Security forces also had no proof that the persons were acting in contravention to the law.
(b) if he is of opinion that it is necessary so to do, destroy any arms dump, prepared or fortified position or shelter from which armed attacks are made or are likely to be made or are attempted to be made, or any structure used as a training camp for armed volunteers or utilized as a hide-out by armed gangs or absconders wanted for any offence;

Yet another clause says that any person arrested and taken into custody under AFSPA shall be handed over to the officer in charge of the nearest police station with the least possible delay, together with a report of the circumstances occasioning the arrest.

In case of arrest of any person, army authority is duty-bound to hand over to the officer-in-charge of the nearest police station with the least possible delay (Horendi Gogoi v. Union of India, (1991) Gau CR 3081). The ENSF report, however, stated that the operation clearly flouted this clause when they kept the bodies of the miners hidden with them from 4.20-30 pm till the arrival of the villagers at around 8.30 pm.