Nagaland ambush: It may be time for India to uphold human dignity, take a hard look at some of its regressive laws like AFSPA which includes Special Laws that authorises detention without trial. 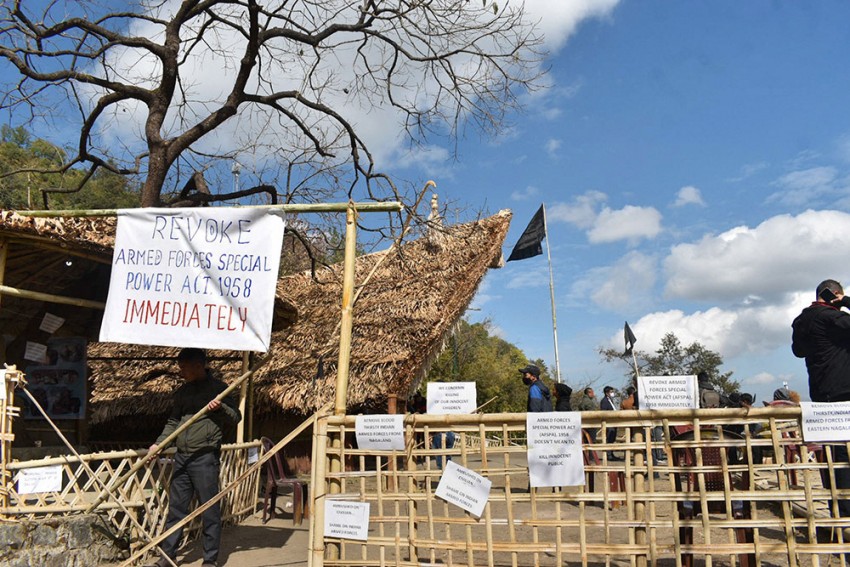 December 4, 2021. It was a cold evening. The sun had set in Oting, a small village in the Mon district of Nagaland. Most of the men here earn their living by working in a coal mine located in the Lower Tiru village. A group of workers were returning home after the day’s work, riding a van. Between Oting and Lower Tiru village, under Tizit sub-division, they were ambushed by a contingent of Indian Army lying in wait, reportedly, for insurgents of the Yung Aung led NSCN (K) faction. The Army contingent, belonging to Assam Rifles, mowed down six poor, hardworking Naga villagers and instantly took away the only bread winners of six poor families. None of them were insurgents. They were citizens of the world’s largest democracy where Rule of Law is Supreme. Or is it?

Standard response to such situations by the state and security forces is an apology and an announcement of an enquiry commission. In this particular incident, an apology by the Army and constitution of a special investigation team. In neither case, the possibility of punishing the guilty and stopping recurrence of such incidents in future, at best, are remote possibilities. The other response is to take recourse to the oft-repeated excuse of collateral damage while dealing with threats to national security. The point is, whatever may be the excuse, can the state and the security forces take away the citizens life so arbitrarily? This question leads us to what Indian democracy is all about.

Nagaland is a state in India, and India is a Union of States that works on the principles of democratic federalism. Or does it? No doubt, Nagaland and some of the states of the northeast are embroiled in insurgent activities and rebellion since the time of independence and thereafter. There is no scope in this article to go into the reasons. Of course, the Union has to respond to it and respond forcefully. But the way the successive governments responded over the years to tackle this problem, has brought more questions than answers.

Nagaland:14 Civilians, One Soldier Killed In Firing And Rioting

The Constitution of India says the prime objective of governance is to secure justice, liberty, equality and fraternity for all citizens assuring the dignity of the individual and the unity and integrity of the nation. Therefore, it goes without saying that individual dignity and equality before the law of all the citizens are as important as the unity and integrity of the nation. But in reality, have we seen this principle being upheld while dealing with insurgency and rebellions in the northeast and some other peripheral states of the country? I am afraid we haven’t. And here lies the problem.

Independent India kept in its statute books some colonial laws which the freedom fighters condemned as draconian and unbecoming of any constitutionally ruled country, not to speak about a functional democracy like independent India. At the Constituent Assembly, members debated the matter of preventive detention and allowed it to be retained only on specific grounds with abundant caution to be exercised by the executive and thereafter judiciary diligently ensuring that due process of the preventive law is not violated in any circumstances. Unfortunately, the successive elected Indian governments are happily and continually making preventive detention laws more and more drastic and draconian, taking away, in some instances, even the judicial power to review such acts, which, in any constitutionally ruled society, would have come under acute judicial review.

The emergency measures of the Defence of India Act, 1915, which were indefinitely extended by the infamous Anarchical and Revolutionary Acts 1919, popularly known as Rowllat Act, was re-enacted in 1939 during the Second World War and was retained by the government of independent India and later made more drastic and authoritarian in its newer avatars like the MISA, the POTA, the UAPA, the AFSPA, the COFEPOSA and others. Under the new UAPA, many people are detained for long periods behind bars without recourse to bail or judicial review. Under the dreaded AFSPA, many acts of killing of innocent civilians took place in states like Manipur, Nagaland, the J&K, and other places where insurgent activities are not yet brought under full control.

The incident that took place at Nagaland's Oting in the evening of December 4, is one more such incident that brings into sharp focus the question, does such arbitrary power to kill people should be allowed to continue in the statute books or should such power be exercised only under strict judicial scrutiny with specific limits set out in all such laws.

The executive must not be allowed to use such laws to cover their failures to bring to justice the wrongdoers under the ordinary laws of the land that has enough power to deal with such acts. It must also be ensured that the preventive arrest power that is already there in the CRPC is exercised only by adhering all the time to the principles of Rule of Law and natural justice, while resorting to those provisions in the interest of unity and integrity of the nation.

All lives are precious, and in a functioning democracy like India, it is the cornerstone to test whether the democracy as practiced in the country stands the rigours of challenges of upholding the citizens democratic rights and individuals basic human dignity. There is no easy way out. The sooner we realise it, the better for our democracy. The time is now to stop incidents like that happened on the evening of December 4 in the remote Oting that resulted in the death of 16 and injured a few more, none of whom was a threat to national security, as the report goes.

The positive outcome that has now emerged from this highly condemnable and nationally lamentable act is the call for repeal of the AFSPA, voiced by all the opposition leaders and also by some allies of the ruling coalition like the Chief Ministers of Nagaland and Meghalaya.

Not only this law, all other special laws that authorises detention without trial should all be repealed so that India becomes a true democracy where rule of law is supreme and human rights and individual dignity get equal importance with unity and integrity of the nation.