The protests that have been rocking the Blue Mountains of Nagaland since the December 4 massacre, don't even appear as a dreamscape in the horizon of the putative Indian 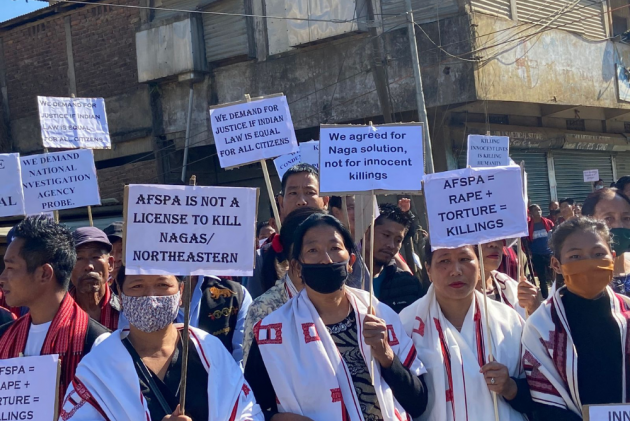 At around 6 pm on Wednesday, December 15, a crackling voice on the public announcement system broke the silence of the little mountain town of Oting in Mon district of Nagaland, which has been in mourning ever since 14 civilians were killed by Indian special forces on December 4 and 5.

A woman’s voice urged the residents of Mon to join a peaceful protest the next day, dressed in their traditional wear. The Konyak civil society organisations had called for a bandh to be observed across Mon district on Thursday, to stress upon their demands regarding the incident and to pledge non-cooperation with the Indian Army.

Nyamto Konyak, a retired school teacher who was sitting near a fire with his wife at the time of the announcement, said only on significant occasions do they wear tribal outfits. The Konyak tribe has its own attire that demarcates it from other Naga tribes, he said.

“We want to assert our tribal identity,” he said.

Mon is where the Konyak population is mostly concentrated, though there are some pockets in Myanmar, Arunachal Pradesh and Manipur, where they even have colleges dedicated to the tribe. Mon, which borders Myanmar, has no proper roads, and villages like Oting remain remote and cut-off. 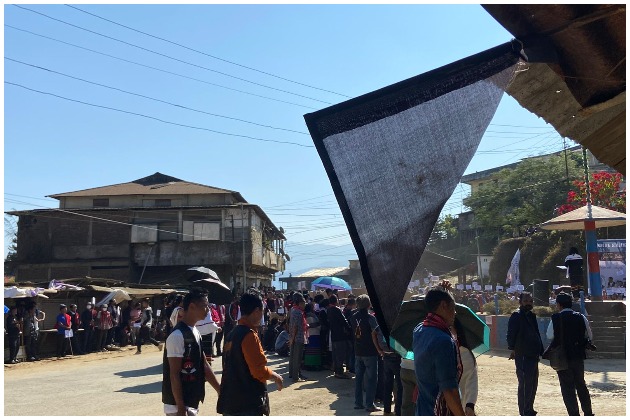 The first incident has been claimed to be a case of mistaken identity by the union home minister, which the tribal unions and villagers have dismissed. The six people along with the two injured in the first ambush were coal miners and were returning home on Saturday evening as they usually did when they were shot. Referring to the killings, the people here say “direct marise” and show the photos of the windscreen of the pickup that has holes punctured into it.

Amit Shah told the Lok Sabha that the army had received information on the movement of insurgents in Mon and '21 Para Commando' unit had laid an ambush near Tiru mines. Much has been reported about the killings.

That afternoon, Yingpe stopped by. She is part of the Eastern Nagaland Peoples’ Organization and has been trying to mobilize youth in the region. She said the only way to remind them of their struggle is via the church. But after she is done talking about the non-cooperation to Indian army based on the December 8th 2007 resolution that was passed in Tuensang that said the ENPO shall not extend any cooperation to any factions or groups for non-compliance of their decision regarding no bloodshed in the ENPO jurisdiction, she faced the blazing sun behind the layers of mountains.

She said they love the blue mountains but not the people.

Perhaps that’s how they have begun to see it now. Or maybe the alienation has been there for too long for them to know that the “othering” is part of politics. But Yingpe, who is a tribal princess and thereby commands respect in her community, is angry. She said she had put in her resignation in Kohima since she now wants to be here.

“We are the others,” she said. 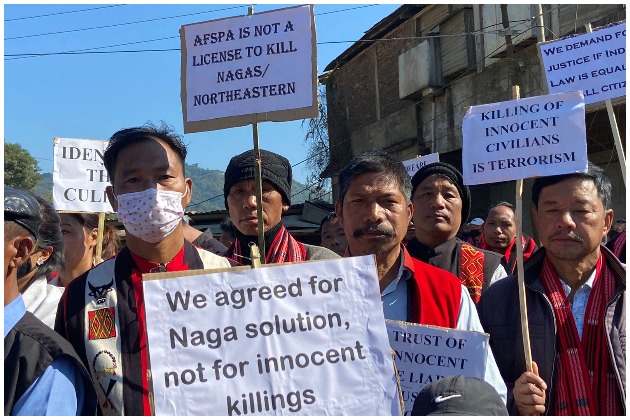 (Protests against civilian killings in Mon | Photograph by Chinki Sinha)

With what they call the “Oting Massacre”, the locals now want to assert their demand for the repeal of AFSPA once again and also surge ahead with their demand for Nagalim, a separate state for six tribes in the eastern part of Nagaland. Nagaland’s history and identity have long been a contentious issue, with many tribes saying they are different from the rest, and therefore, clubbing them under the umbrella “Naga” tag isn’t how the state should have been formed. In any case, the killings have brought back the horror of decades of struggle for sovereignty, the insurgency and Army atrocities.

The Union home minister had claimed that the opening incident of the evening of Saturday, December 4— in which six Konyak coal miners returning home were ambushed and killed by special forces (two others were injured)—was a case of mistaken identity, something the tribal unions and villagers have summarily dismissed. People here say “direct marise” and show photos of the windscreen of the pickup they were in, which has tell-tale bullet holes.

Amit Shah told Lok Sabha that the Army had received information on the movement of insurgents in Mon and the 21 Para Commando unit had laid an ambush near Tiru mines.
Details of that encounter have been covered comprehensively in mainstream media.

That afternoon, Yingpe stopped by. She is part of the Eastern Nagaland Peoples’ Organisation (ENPO), and has been trying to mobilise youth in the area. She said the only way they can keep the memories of their struggle alive is via the church. After she is done talking about the non-cooperation movement against the Indian Army—based on a resolution that was passed in Tuensang on December 8, 2007 that said ENPO shall not extend any cooperation to any factions or groups that fail to comply with their decision—she emerges into the blazing sun.

She says the Indian state loves the blue mountains, but not the people.

Perhaps that’s how Nagas see it now. Or maybe the alienation has been there for too long for them to know that “othering” is part of politics. But Yingpe, who commands respect in her community by virtue of being a tribal princess, is angry. She says she had tendered her resignation from her job at a human rights organisation in Kohima, as she wanted to be here.

“We are the Others,” she said.

Here, in this place where the horizon is full of mountains, clouds and blue skies—a perfect social media vignette, because, as Susan Sontag wrote, everything exists to end as a photograph today—the young men and women walked up to the market square to be part of the bandh. They carried placards and wore their tribal attire, standing silently in the sun, listening to the story of the encounter being retold. Here, they repeat stories. Forgetting isn’t easy. The people here had hoped it would become peaceful after all. But now that they have witnessed the killings, said a man from the Konyak Union, there's no going back.

“They had only heard stories, which were painful enough. But now they have witnessed an atrocity. We've lost the trust,” he said.

The other night, they held a candlelight vigil for the dead in Mon. 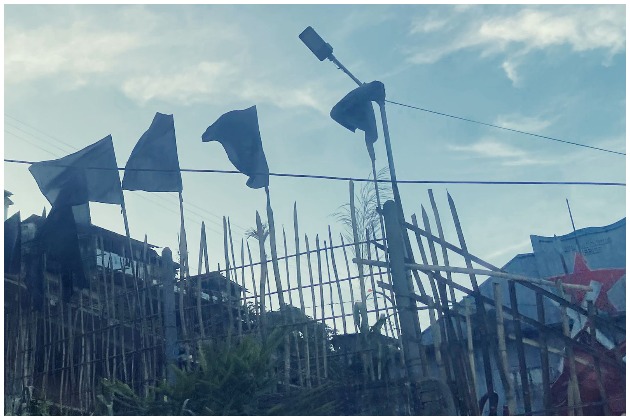 Black flags still dot the landscape, as markers of grief and protest.

This is a time for revision for the people here. Memory is like a long road, perhaps. Like signs on the road, there are reminders of ambushes, rapes, deaths and killings. Everyone knows. Everyone remembers. Even if they weren’t there or weren’t born then, they will tell you what had happened.

They are people whose hearts have perhaps turned blue with grief.

They says beauty is a curse. Towards the evening, the blue mountains turn a deep shade of midnight. Red Christmas lanterns light up the streets. There are no streetlights. There aren’t even streets for that matter. This is an elsewhere place. A place the mainland Indians haven’t tried to know about. A place that comes to us as photos of people brandishing spears and tales of headhunters. We, the voyeurs, discuss endlessly if the Nagas eat dog meat and have human skulls in their homes or not.

That’s why Yingpe says behind the blue mountains, there are tragic stories of people in a “disturbed” place.

“You will not know what it means to be here,” she says.

Vigils and protests. Black flags and defiance. And endless blue mountains and countless stories about their identity and their struggle is what defines this place.

Later that night, I wrote down Mon in my notebook. And then, I inserted “ur” in between “o” and “n”. Just like that.

A girl had said that in Mon, they mourn. For now.