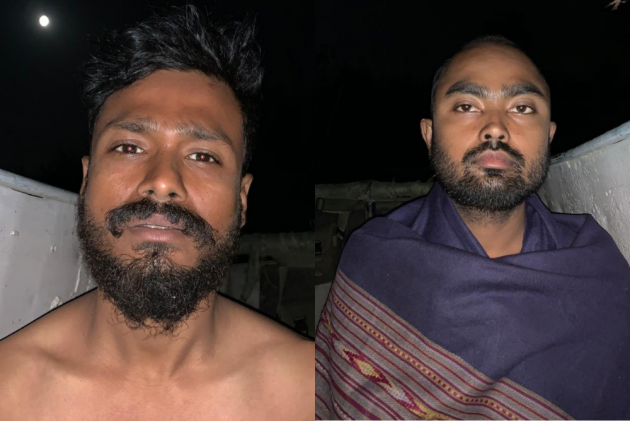 Troops of the Assam Rifles and Naga Territorial Army on Saturday rescued two of the three abducted ONGC officials, who were being held hostage by Ulfa (I) militants in Nagaland’s Mon district.

The two rescued officials are Alakesh Saikia and Mohini Mohan Gogoi. A rescue operation is underway to free the third official, Ritul Saikia.

However, late on Saturday afternoon, Ulfa (I) claimed that  it had left the three abducted officials at Tokok Chinkhu village in care of the residents and left the area after the encounters.

In a statement, the outfit expressed surprise that the security forces had found only two officials. It suspected that Ritul Saikia was either killed in firing by the security forces , which they had resorted to even after the outfit members had vacated the area, or were hiding him.
The outfit also blamed the 'outsider' ONGC for the development and warned of action in future. They were abducted on April 21 from the ONGC plant located at Lakwa in Assam’s Charaideo district.

Sources said troops of 35 Assam Rifles based in Mon were involved in today’s rescue operation, which was launched at around 1.30 am.

According to officials, the forces launched the rescue operation based on a tip-off about many people moving around the area dressed in Army uniform.

“We surrounded the area at around 1.30 am and a brief encounter ensued with the militants after which the group moved away. Subsequently, there were two other encounters and it was after the third face-off that we rescued the two officials, whom the militants had left behind before fleeing,” a source said. The entire operation lasted for about an hour-and-a-half.

There are reports of one causality but the news is being verified, the source said adding that an AK-47 rifle was also recovered from the site.

A group of around 10 militants, comprising Ulfa (I) and NSCN (K) members were heading towards Longwa on the Nagaland-Myanmar border with their captives when they were intercepted.

Saikia and Gogoi were taken to the 35 AR camp in Mon town after their rescue.

As news of the rescue spread, scenes of subdued jubilation were witnessed at the houses of Gogoi and Saikia, earlier today.

While both the families await the return of the rescued officials, they have also been praying for the safety of Ritul Saikia.

The trio was abducted under the command of one ‘major’ Ganesh Lahon along with four accomplices on April 21. They were kidnapped at 3 am and whisked away in an ONGC ambulance, which was later found abandoned a few kms away from the plant.

Over the past couple of days, police have arrested several people suspected to have played a role in the trio’s abduction.