On February 24, US President Donald Trump along with PM Modi had taken part in a road-show in Ahmedabad, which was attended by thousands of people. 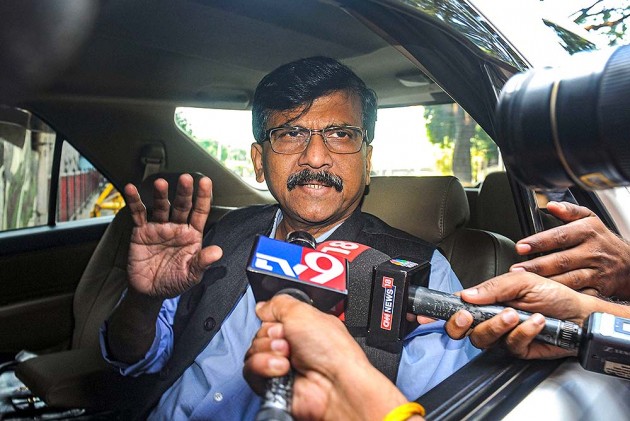 Shiv Sena leader Sanjay Raut on Sunday alleged that the event held in Ahmedabad to welcome US President Donald Trump in February was responsible for the spread of coronavirus in Gujarat and later in Mumbai and Delhi, which some of his delegates had visited.

Raut also hit out at the Centre saying that the lockdown was implemented without any planning, but now the responsibility of lifting the curbs was left to the states.

The Sena MP said that despite the opposition BJP's attempts to pull down the Maharashtra Vikas Aghadi (MVA) government, there was no threat to it as its survival is the'majboori' (compulsion) of all the three ruling allies- Sena, NCP and Congress.

"It can't be denied that the spread of coronavirus in Gujarat was because of the massive public gathering held to welcome US President Donald Trump. Some of the delegates, who
accompanied Trump, also visited Mumbai, Delhi, which led to the spread of the virus," Raut said in his weekly column in Shiv Sena mouthpiece 'Saamana'.

On February 24, Trump along with Prime Minister Narendra Modi had taken part in a road-show in Ahmedabad, which was attended by thousands of people. After the road-show, the two leaders had addressed a gathering of over one lakh people at Motera cricket stadium, run by Gujarat Cricket Association (GCA).

Gujarat had reported its first coronavirus cases on March 20, when samples of a man from Rajkot and a woman from Surat tested positive for the disease.

Raut said that any move to pull down the Uddhav Thackeray-led MVA government and impose President's rule in the state citing its failure to curb the coronavirus pandemic
would be suicidal.

"The state had witnessed how President's rule was imposed and lifted as per will six months ago," he said.

"If the handling of coronavirus cases is the basis of imposing President's rule, then it should be done in at least 17 states, including the BJP-ruled ones. Even the central government has failed to curb the pandemic as it had no planning to fight the virus," he said.

"The lockdown was imposed without any planning and now without any plan, the responsibility of lifting it has been left to the states. This chaos will further worsen the
crisis," he said.

The Sena MP said that Congress leader Rahul Gandhi has made an excellent analysis of how the lockdown has failed.

"It is shocking that people can indulge in politics by demanding President's rule in Maharashtra for the rise in the coronavirus cases," he said.

BJP MP Narayan Rane had recently met Maharashtra Governor B S Koshyari and demanded imposition of President's rule in view of the Shiv Sena-led state government's
"failure" in tackling the coronavirus pandemic. However, the BJP had later said that it was not trying to destabilise the government.

Speaking about the stability of the government, Raut said that the survival of the MVA government was the 'majboori' (compulsion) of each of the three alliance partners.

"Even if there are internal conflicts among the ruling partners, there is no threat to the government as the allies know that its survival is the 'majboori' of each one of them," Raut said.

He said that the Devendra Fadnavis-led government, in which the BJP and Shiv Sena shared power, saw internal conflicts between the ruling allies, but it completed its full five-year term.

Slamming Fadnavis, who is now the Leader of Opposition in the Legislative Assembly, for predicting downfall of the MVA government saying it will fall on its own due to its internal bickering.

Fadnavis, in an online media interaction held earlier recently, said he had no intention to destabilise the MVA government and said it would collapse on its own.

"What Fadnavis means is that all attempts (of the BJP) to create discord among the three allies and break the MLAs has failed. Now the opposition hopes that something would happen among the allies and the government would be fall apart," he said.

Raut said NCP president Sharad Pawar is the prominent leader, who laid the foundation stone of the "Thackeray sarkar", and only he can predict the future of the government.

"He continues to say the government is stable and even the Congress is not going anywhere. MVA legislators are not up for sale in horse-trading. Hence, if the opposition says that the government will fall, it is wrong," he said.