Home Minister Amit Shah said no other political leader in the world has completed 20 years in public office, except Modi. 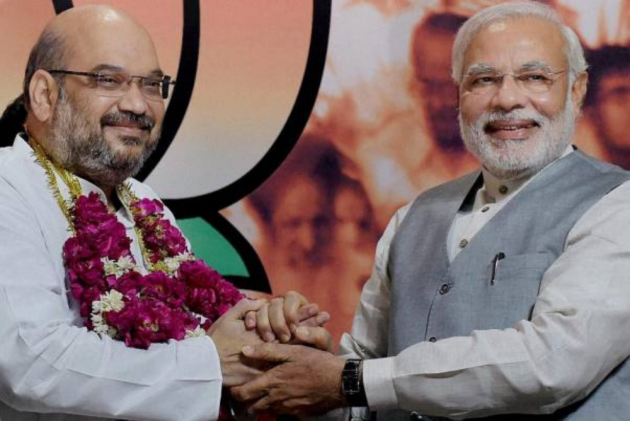 "Yesterday, Narendra-bhai completed 20 years in public office. Not a single leader in the world has so far achieved this feat of getting elected continuously for 20 years and serving people without a break for 20 years,” said Shah, while addressing a function at Pansar in Gandhinagar district of Gujarat.

"In democratic countries, where people can change their elected representatives, you will not find a single leader who has served continuously for such a long period. Narendra Modi assumed the office (as Gujarat chief minister) on October 7, 2001, and yesterday was October 7, 2021. He is prime minister today and he will be elected again in 2024," he said.

The Union minister, who represents Gandhinagar in the Lok Sabha, was on a one-day visit to Gujarat.

After inaugurating a tea stall run by a women self-help group at Gandhinagar Railway Station, he reached Pansar village near Kalol town to inaugurate a Primary Health Centre.

The Union home minister also performed a ground-breaking ceremony for a lake beautification project at Pansar. During the subsequent function, he launched 143 small projects worth Rs 11 crore.

Modi could remain in office for so long because he always cared for people, Shah further said in his speech.

"I have always seen him focusing on things which are incomplete. You will hardly find such concern for the nation, state, people and the poor in any other leader," the Union minister added.

The Modi-led Union government's achievements in the last seven years would outweigh those of Congress governments in 70 years, he claimed.

He listed various achievements of the Modi government such as opening of 60 crore bank accounts, construction of 10 crore toilets and providing electricity to five crore people.

Shah later left for his native town of Mansa in the district to perform puja at the Bahuchar Mata temple on the occasion of Navratri, a tradition he has been following for the last many years. (With PTI inputs)