The Uttar Pradesh government has invoked National Security Act against the seven accused arrested in the December 3 cow slaughtering case that claimed lives of two people including a police inspector. 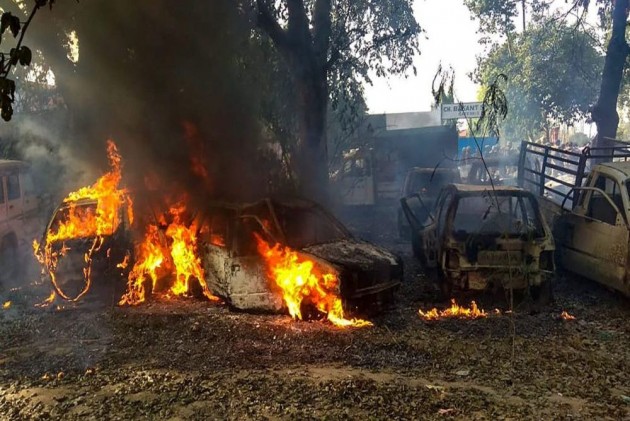 Seven people were arrested in the cow slaughter case, officials said, adding that three of them-- Azhar Khan, Nadeem Khan, Mehboob Ali-- were charged under the NSA.

"The three accused had applied for bail and there was a chance of them getting the bail. Keeping that in mind, the National Security Act has been invoked against them," District Magistrate Anuj Jha said.

"To maintain public order and amity, the three have been charged under the section 3 sub-section 3 of the NSA. The action has been taken based on a police report which stated that the trio indulged in cow slaughtering for earning money illegally," Jha added.

"Their acts have hurt the sentiments of Hindus in Mahav and Nayabans village after which the violence broke out in which people attacked the police with sticks and axe, among others, and Inspector Subodh Kumar Singh was killed. This had disturbed public order and communal harmony," Jha said in a statement.

The district magistrate further said that if the trio was released on bail, they might tamper with evidence or engage in cow slaughter again which will disrupt public order

On December 3, a mob of some 400 people including some Hindu right-wing activists, had rampaged through the Chingrawathi village, apparently after cow carcasses were found strewn in a jungle nearby.

The mob set dozens of vehicles on fire, hurled stones and even fired from guns at police who had to retaliate with gunfire.

Inspector Subodh Kumar Singh, 44, and civilian Sumit Kumar, 20, of Chingrawathi village were killed of gunshot injuries in the ensuing violence.

An FIR against 27 named people and 50 to 60 unidentified people was registered at the Siyana Police Station for the violence that was witnessed at Chingrawathi police post after cattle carcasses were found strewn outside nearby Mahaw village.

“Yes,” District Magistrate Anuj Jha said in response to a PTI query on whether the stringent NSA was invoked against those arrested in the cow slaughter case.

On January 3, the police had arrested local Bajrang Dal leader Yogesh Raj, also a key suspect in the case.

A separate FIR was lodged by the police for cow slaughter on a complaint by Yogesh Raj.

So far, over 35 people have been arrested in connection with the violence, including Army jawan Jeetender Malik, Prashant Nat who allegedly shot the inspector dead and Kalua who had attacked him with an axe, the police said.