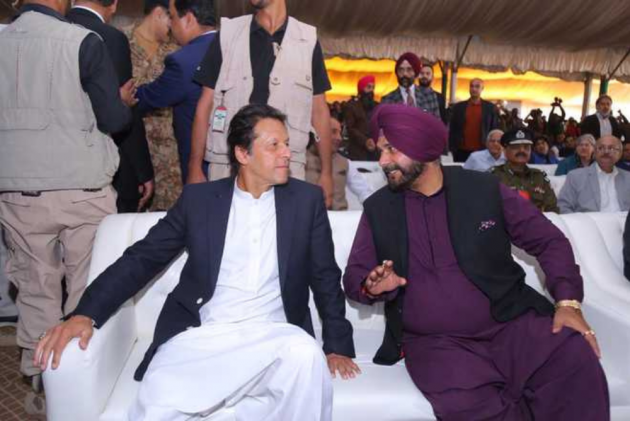 Punjab Congress chief Navjot Singh Sidhu has been facing flak from the Opposition for referring to Pakistan Prime Minister Imran Khan as 'Bada Bhai' (older brother). Sidhu made the comment during his recent visit to Kartarpur Sahib gurdwara in the neighbouring country. Despite facing flak, Sidhu on Saturday remained silednt and chose not to respond to the criticism against him.

When Kartarpur Corridor Project Management Unit CEO Muhammad Latif welcomed Sidhu at the zero point and extended best wishes to him and his delegation on behalf of the Pakistan prime minister, Sidhu was effusive in his praise for his ex-cricket rival.

"Imran Khan is my elder brother. I am greatly honoured. He (Khan) gave us a lot of love," Sidhu is purportedly heard saying in a viral video.

The video led to widespread criticism from Opposition leaders including members of the BJP. Sidhu later dismissed the BJP's criticism.

"Whatever the BJP may say, I will not make any accusation against anyone,” Sidhu told reporters at the border point in Gurdaspur after his return when asked to respond to the BJP's attack.

Later, Sports minister Pargat Singh, who was also part of the 'jatha' which visited the Kartarpur Sahib defended Sidhu.

“It is unfortunate. Just a few days back, we played a cricket match with Pakistan. We also try to develop sports ties so that such bitterness should not go up,” said Singh, when asked to respond to the BJP's criticism of Sidhu's remark.

“I do not understand with which angle the BJP sees it. It is an unfortunate part,” he added.

Later, an official statement quoting Pargat Singh said the land of Kartarpur Sahib conveys the message of mutual love and harmony of Guru Nanak Dev but sadly the BJP is not shying away from playing “sordid political games” here too.

He asked where were the BJP leaders when Prime Minister Narendra Modi had reached Pakistan uninvited to celebrate the birthday of the then prime minister of the neighbouring country.

Earlier after Sidhu called Imran Khan his "elder brother", the BJP in New Delhi hit out at the Congress alleging that the opposition party sees terror groups like IS and Boko Haram in Hindutva while it finds a "bhai jaan" in Khan.

The SAD and BJP leaders in Punjab too slammed Sidhu for his remarks and accused him of “repeatedly insulting and demoralising” the country's soldiers, guarding the borders with Pakistan, by “constantly eulogising” Imran Khan.

In a statement here, Shiromani Akali Dal chief Sukhbir Singh Badal said it is shocking that Sidhu has referred to Imran Khan, who has been “propped up” by the Pakistan military establishment and is an ISI “puppet”, as an elder brother.

“This is not the first time that Sidhu has cosied up to the ISI. Earlier also during his visit to Pakistan, he had embraced Pakistan Army General Qamar Javed Bajwa despite knowing that the latter was engaged in a proxy war with India in Kashmir which has led to the martyrdom of hundreds of Punjabi soldiers.

“Sidhu has gone out of the way again to praise Imran Khan whose government is actively engaged in stirring up unrest in Punjab. This is most condemnable. Sidhu should desist from such activities which can only harm Punjab and become a threat to the peace and communal harmony in the state,” said Badal.

“They should explain whether Sidhu's utterances are of his own accord or whether he speaks for the Gandhi family,” he asked.

In a statement, Chugh said, “It is most unfortunate for Punjab and the country that Sidhu, while in Pakistan has no words of praise for his motherland but instead is singing paeans to the Pakistan prime minister who has been sending drones and tiffin bombs to Punjab.”
Chugh said it proves that Sidhu is more in love with Pakistan than India and is behaving like a Pakistan agency in Punjab here.