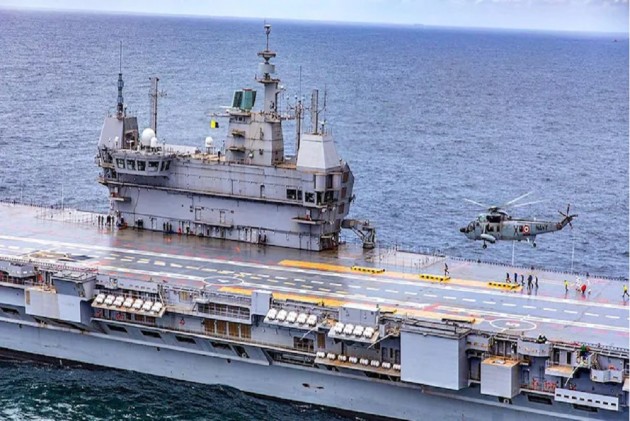 The engineer marvel, which is the largest and most complex warship built in the country, opened its 'doors' to mediapersons Friday in Kochi after its maiden sea trial successfully concluded on August 8.

Speaking on board the 40,000-tonne warship, Flag Officer Commanding-in-Chief of the Southern Naval Command Vice Admiral A K Chawla said the five-day trial was a "glowing testimonial" to the country's vision of an Atmanirbhar Bharat.

"It demonstrates the Indian Navy's capability to design and oversee the construction of the most complex of warships, as also the capability of our ship-builders and industries to successfully execute such a large and complex ship-building project," he said.

The IAC, built at a cost of around Rs 23,000 crore, has been described by the Navy as "historic" as it propelled India into a select group of countries having capabilities to build state-of-the-art aircraft carriers.

Commander Sreejith, a senior electrical overseer officer, told PTI that "the power used in the ship can light up half of the Kochi city". However, the officer said the exact power generated in the ship cannot be disclosed as it was "classified information".

"All the major electrical industries including BHEL have contributed to the construction of this ship. We have used approximately 2,600 km-long cable in this," he said.

Major Manoj Kumar, the Designer architect of the IAC, who shared factual details about the aircraft carrier and said "with the steel used in this, we can build three Eiffel towers".

"There is a fully functional medical complex inside the ship with two operation theaters. There is a kitchen to cater to the needs of at least 2,000 staff on the ship. We have automated machines in the kitchen. We can park 20 aircraft in the hangar," he said.

Anoop Hameed, part of the warship overseeing team which assesses the day to day progress of the ship said it was a "floating island".

"The aircraft needs to generate enough power to take off due to the short runway and we also need a proper mechanism to arrest a landing one. We need to have that much power and coordination. This ship has everything inside it. This is a floating island," he said.

The media team also met women officers who are part of the group which undertook the maiden sea trial.

Suresh Babu, Advisor to Chairman and Managing Director, Cochin Shipyard, told the media the sea trial was able to prove the workmanship of the CSL.

"We have received two more orders, an anti-submarine warship and next generation missile vessels from the Navy and these are the two new orders worth Rs 16,000 crore," Babu said.

He said the construction of the IAC was a major challenge to the design team of the Cochin Shipyard Limited (CSL).

"The design process and construction happened concurrently. It was very challenging for the designing team," he said.

He said currently, the CSL is the only shipyard in the country that could undertake repairs of major aircraft carriers.

"INS Viraat was repaired around 13 times here. We have the largest dry dock. We have a 300-member strong designer team and the productivity of the CSL helped us in bagging the order," Babu said.

The Naval officers escorted the media contingent through the hangar and the flight deck.

Chawla said the country can be justifiably proud of this achievement as India joins an elite club of nations that can design and build aircraft carriers.

“The Indian Navy is confident that the new Vikrant will carry forward the illustrious legacy of its predecessor and write a new and glorious chapter in our maritime history," he said.

The first INS Vikrant played an important role in India's victory in the Eastern theatre during the 1971 war.

The warship, which will host MiG-29K fighter jets, Kamov-31 helicopters, MH-60R multirole helicopters, has over 2,300 compartments, designed for a crew of around 1,700 people, including specialised cabins to accommodate women officers.

The aircraft carrier, with more than 76 per cent indigenous components, is expected to be commissioned into the Indian Navy by August next year after it completes the aviation trials.

"Vikrant has a top speed of around 28 knots and cruising speed of 18 knots with an endurance of about 7,500 nautical miles. The ship can accommodate an assortment of fixed-wing and rotary aircraft," the Navy had said in a statement.

Around 550 Indian firms including about 100 MSMEs are registered with the Cochin Shipyard Limited(CSL) and they provide various services in the construction of the IAC.