The poster has references to 2001 Hindi political thriller 'Nayak', a remake of Tamil film Mudhalvan (1999) in which Kapoor plays a reporter, who becomes chief minister of Maharashtra for a day and strives to eliminate corruption. 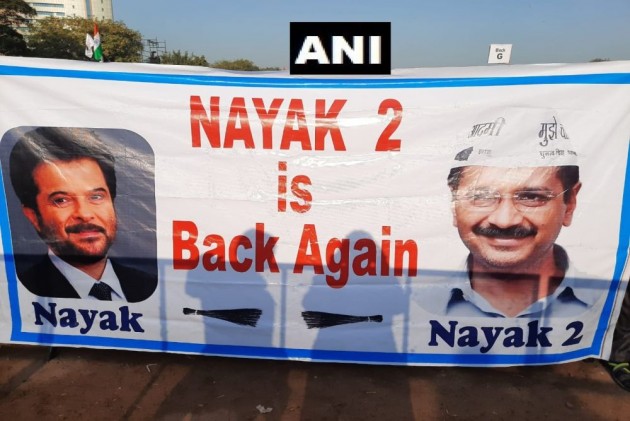 Ahead of the oath-taking ceremony of Aam Aadmi Party (AAP) chief Arvind Kejriwal, supporters have gathered with creative posters and placards at the Ramlila Maidan, where "Delhi ka Beta" will be sworn in as chief minister for the third time.

"Nayak 2 is Back Again," read a banner, which has a photograph of Bollywood actor Anil Kapoor, the lead in the film on the left and Arvind Kejriwal wearing Aam Aadmi Party's cap on the right.

The poster has references to 2001 Hindi political thriller 'Nayak', a remake of Tamil film Mudhalvan (1999) in which Kapoor plays a reporter, who becomes chief minister of Maharashtra for a day and strives to eliminate corruption.

Kejriwal, along with other ministers, is scheduled to take oath at 12:15 pm in a grand ceremony at the Ramlila Maidan.

The Aam Aadmi Party handed the BJP a crushing defeat after the former's near repeat of the 2015 heroics, winning 62 of the 70 seats in the national capital.

The BJP failed to woo the voters despite a high-voltage campaign, which saw a battery of Union Ministers and Chief Ministers taking to the streets.

The BJP improved its tally, marginally, managing to win eight seats, 5 more than its 2015 tally. The Congress failed to open its account in the second successive election.