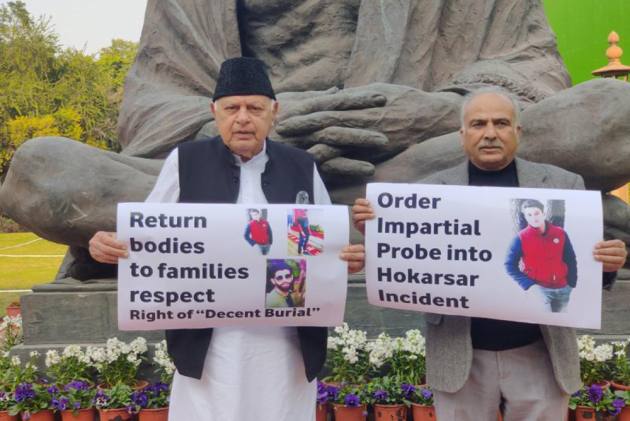 Former chief minister and National Conference president Dr, Farooq Abdullah on Wednesday held a demonstration seeking the return of the bodies of three youths killed in the Hokarsar ‘encounter’ on December 30, and an investigation into the alleged encounter.

This comes days after the Jammu and Kashmir police booked family members of a teenage boy killed in the encounter under the Unlawful Activities Prevention Act, for holding a demonstration in his village “demanding the return of his body.”

Carrying placards demanding “return bodies to families, respect right of decent burial” and order “impartial probe into Hokrsar incident,” the NC MPs, Dr. Farooq and Hasnian Masoodi, sought a probe into the encounter and condemned the FIR filed against the family of one of the youths killed in the incident.

Earlier this week the police filed an FIR against Mushtaq Ahmad Wani, whose 16-year-old son was among three youths who were killed in ‘encounter” in the outskirts of Srinagar. According to him the police booked him along with his two brothers, a mosque cleric, and three relatives under the UAPA “for demanding the body” of his son”. The police have booked seven people under 147, 341, 153 IPCs, and 13 of the UAPA. The sections under which the case has been filed are punishment for rioting, punishment for wrongful restraint, wantonly giving provocation with intent to cause a riot and the commission of unlawful activity. Wani had taken out a rally from a local mosque after Friday prayers last week seeking the body of his son.

Former chief minister too Mehbooba Mufti has expressed surprise over the police FIR. “After losing his son in an alleged fake encounter, Athar Mushtaq’s father has been slapped with an FIR for demanding his body. His crime was to stage a peaceful protest. The inhabitants of Naya Kashmir can’t even question a callous admin & have been reduced to living corpses,” Mehbooba tweeted.

After losing his son in an alleged fake encounter, Athar Mushtaq’s father has been slapped with an FIR for demanding his dead body. His crime was to stage a peaceful protest. The inhabitants of Naya Kashmir can’t even question a callous admin & have been reduced to living corpses

On December 30, the army claimed to have killed three militants-- Ather Mushtaq Wani, 16, a class XI student. Aijaz Ganai, 22 and Zubair Lone, 25 -- in the outskirts of the main city of Srinagar following in a 17-hour gun battle. All three are from villages in southern Kashmir’s Pulwama and Shopian districts.

Soon after the encounter, General Officer Commanding (GoC) Kilo Force Major General H S Sahi, while addressing the media had stated that the three militants had plans to carry out a "big strike" on the Srinagar-Baramulla Highway and that they had turned down repeated surrender offers during the encounter.

But family members of three slain youth protested outside the main police headquarters in the main city, and alleged that their kin were killed in a staged-gunfight as they were “in their homes normally hours before the gunfight had started”. The bodies were buried more than 100 km away from their homes in Sonmarg. Most militants have been buried far from their homes under the new policy.