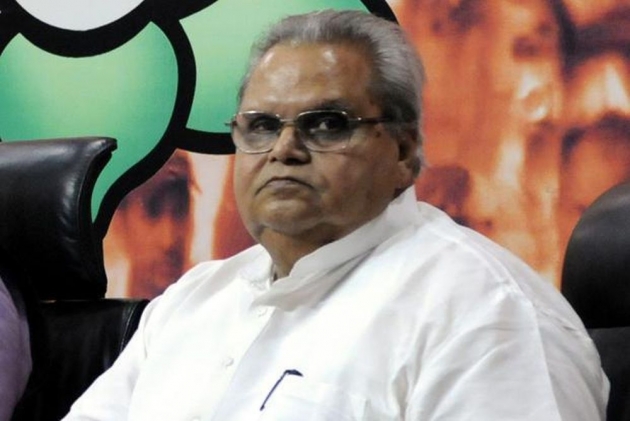 The National Conference on Tuesday condemned the recent statement of Jammu and Kashmir Governor Satya Pal Malik in which he asked militants to kill those people who have looted Kashmir. Though the Governor later attributed his statement to fit of anger over growing corruption in the state, the NC said his remarks are unconstitutional and cast a shadow on the credibility, independence and neutrality of the high office of the Governor.

The party leaders said the Governor must remember he holds a constitutional position and is the custodian of the Constitution.

“National Conference has always maintained the respect and dignity for the high office of the Governor unless the person holding it has created an environment which is against the tenets of democracy and democratic norms and principles,” the NC statement said.

'In A Fit Of Anger': Kashmir Governor Clarifies His 'Advice' To Militants

'Stop Killing Innocents, Rise Against Those Who Looted Kashmir,' J&K Governor To Militants

In a joint statement, the party leaders said that it is nobody's case to protect the corrupt and cover up the malpractices committed by anyone. However, unsubstantiated, unfounded comments to vilify the reputation of any and every politician, public servant and government employees is unwarranted and coming from the Governor himself is highly condemnable. The Governor had also described response of his statement by the NC Vice President as juvenile.

“This man, ostensibly a responsible man occupying a constitutional position, tells militants to kill politicians perceived to be corrupt. Perhaps the man should find out about his own reputation in Delhi these days before sanctioning unlawful killings & kangaroo courts,” Omar had tweeted after the Governor asked militants to kill corrupt politicians. In response, the Governor said, “I am Governor of the State because of my reputation and Omar is where he is because of his reputation.” He described Omar tweeting on issues as juvenile act.

National Conference leaders took strong exception to, what it calls, “some intemperate remarks made against the vice president of the party, Omar Abdullah by the Governor.” They said Omar Abdullah has enjoyed a well-regarded political career. “He has been member of parliament thrice, Union Minister with Prime Minister Vajpayee for three years, Chief Minister of Jammu and Kashmir for six years and is a leader of premier political party of Jammu and Kashmir. Any attempt to sully his image, his reputation and his stature will be strongly taken on by the party and its cadre,” the party added.