Rhea Chakraborty on Tuesday appeared before the Narcotics Control Bureau for the third consecutive day for questioning in the drugs case linked to the death of actor Sushant Singh Rajput. 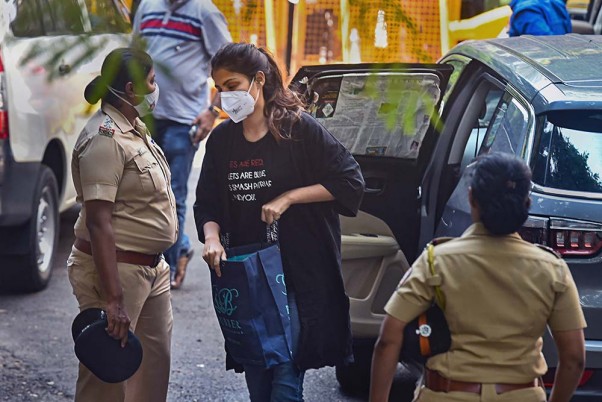 Narcotics Control Bureau on Tuesday arrested actress Rhea Chakraborty in a drug case related to Sushant Singh Rajput's death probe. She will be taken for a medical test.

Rhea Chakraborty on Tuesday appeared before the Narcotics Control Bureau for the third consecutive day for questioning in the drugs case linked to the death of actor Sushant Singh Rajput.

The agency earlier said it was getting "her cooperation" in the drugs case probe linked to case of death of Rajput, who was found hanging in his apartment in suburban Bandra on June 14.

After the questioning session on Monday, NCB Deputy Director General (south-west region) Mutha Ashok Jain told reporters that the agency was doing a "professionally thorough and systematic job" and it will inform the court about its "findings in detail" in this case.

The agency has said it wants to question the 28-year-old actress and confront her with her younger brother Showik Chakraborty (24), Rajput's house manager Samuel Miranda (33) and his house staffer Dipesh Sawant to ascertain their roles in this alleged drug racket.

Rhea Chakraborty was earlier questioned by the Enforcement Directorate (ED) and the Central Bureau of Investigation (CBI) that are probing different angles surrounding Rajput's death.

In her interviews given to multiple TV news channels, the actress had said she has never consumed drugs herself. She had, however, claimed that Rajput used to consume marijuana.

Also Read: Innocent Or Framed? Who’s The Real Rhea Chakraborty, After All?

A total of nine people have been arrested till now by the NCB with seven directly linked to this probe, while two were arrested when the investigation was launched under criminal sections of the Narcotic Drugs and Psychotropic Substances (NDPS) Act.