The tri-party alliance has not yet declared names for the said top posts. 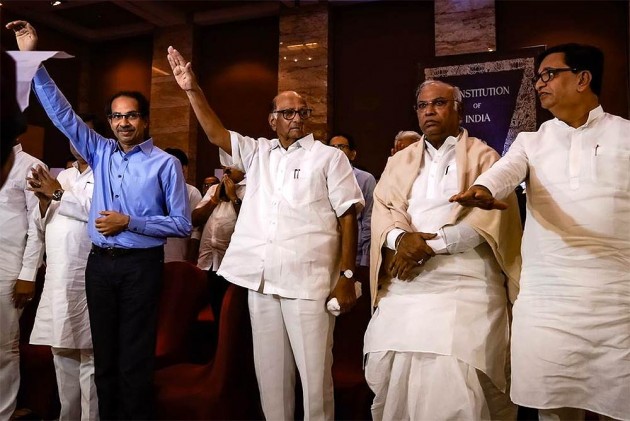 Even though the Nationalist Congress Party (NCP) has said it will get deputy chief minister's post in the new Shiv Sena-led Maharashtra government, no name has been officially given for the same.

The Congress will get Assembly Speaker's post while the NCP will get deputy Speaker's post, NCP leader Praful Patel said on Wednesday night after a meeting of the 'Maha Vikas Aghadi' of the Shiv Sena, NCP and Congress.

He also said that along with Sena chief Uddhav Thackeray, who will be sworn in as chief minister on Thursday evening, one or two members of each of the three parties will take oath as ministers.

BJP Losing Its Strongholds One By One, Maharashtra Is Latest

There will be only one deputy CM's post in the government, Patel added.

Earlier, party sources said both the Shiv Sena and NCP will have 15 ministerial berths each, while the Congress will get 13 berths, PTI reported.

Maharashtra can have a maximum of 43 ministers as the size of the council of ministers can not exceed 15 per cent of the total number of MLAs, which is 288 in the state.

Leaders of the Maha Vikas Aghadi met on Wednesday at the YB Chavan Centre in south Mumbai.

NCP chief Sharad Pawar, Uddhav Thackeray and Congress veteran Ahmed Patel were among the leaders who held talks over council of ministers and the swearing-in ceremony, to be held at the Shivaji Park in Dadar on Thursday evening.

With the swearing-in of 59-year-old Thackeray, the state will have a chief minister from the Sena after 20 years.

Along with CM's from non-NDA ruled states, heads of Congress-ruled states, Congress President Sonia Gandhi, former PM Manmohan Singh have been invited for the swearing in ceremony to be held at Shivaji Park at 6:40 pm today.

Around 400 farmers from various districts of Maharashtra have also been invited to the event.