A year after Ladakh was given the status of a Union Territory, several socio-religious groups raise concerns over preserving Ladakh's culture, identity and, most of all, employment opportunities for Ladakhi youths. 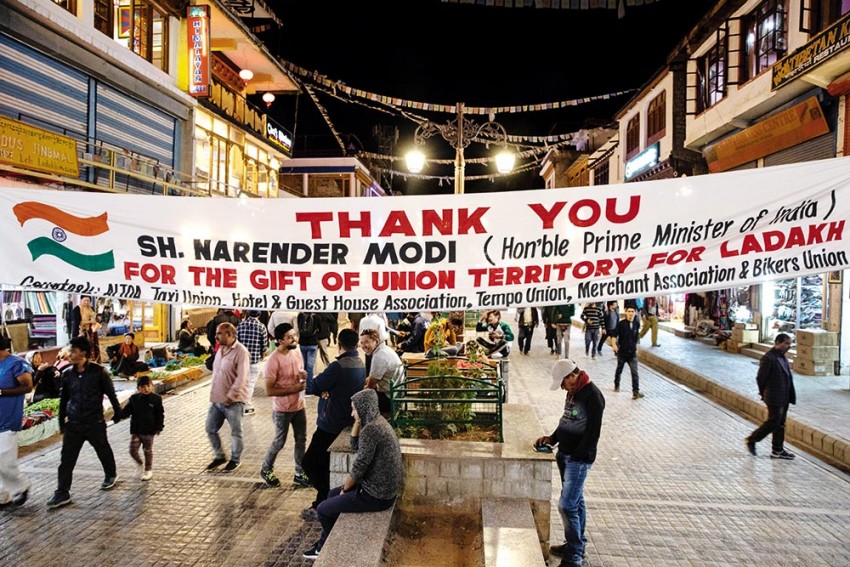 File photo of a banner in a Leh market after Article 370 was abrogated and Ladakh given the status of a UT
Getty Images
Naseer Ganai 2020-07-24T21:59:18+05:30 Nearly Year After Article 370 Move, Ladakh Calls For Domicile Law, Alleges Discrimination In Jobs

Almost a year after Ladakh was carved out as a separate Union Territory, its two districts -- Leh and Kargil -- on Friday observed a complete shutdown against "discrimination in jobs and recruitment".

The call for strike was given by Ladakh Students Educational and Environmental Action Forum and supported by other religious and political organisations.

While the primary reason for the strike call was excluding Ladakh's candidates from applying for newly advertised jobs in Jammu and Kashmir Bank, the applicants say that for the past one year, since Ladakh was established as Union Territory, the government has not come up with laws safeguarding land, employment and environmental concerns of the region.

Jigmat Paljor, President, Ladakh Students Welfare Society explains the wider context of Friday's strike. He says after the establishment of Ladakh Union Territory, they expected job creation would increase, local youths would be employed but "nothing has happened so far."

“There are so many reasons for today’s strike. Yes, Jammu and Kashmir Bank exams was our prime issue. We know J&K asset distribution has not yet completed but our students have given their precious time, money and ability to participate in the J&K Bank exams. They have no role in its cancellation,” he says. Paljor said the response to their call was "very good" as it has the support of religious and political organisations.

“We got the support from the BJP as well. In fact, students of Ladakh are filing a petition before the High Court to stay current recruitment in the J&K Bank. The BJP’s chief executive Councillor in Leh initiated this legal process and he has appointed an advocate to plead the case before the High Court,” Paljor says.

Paljor says the government should come up with a domicile law for Ladakh after consultation with all stakeholders. “We have been raising our voice for the safeguarding of Ladakh’s rights and interests. Our four major points are: Ladakh’s land, our jobs, our environment and our culture. These are four demands of students and the whole of Ladakh region,” he says.

“Our environment is very fragile; our population size is very minimal as compared to other parts of the country. We have some doubts, we have some fear in our minds, we hope the government will take steps to erase these fears,” adds Paljor.

The BJP-led central government revoked Article 370 of the Indian Constitution and bifurcated Jammu and Kashmir into two Union Territories -- Ladakh and J&K -- on August 5, 2019. In March this year, the Union home ministry issued a gazette notification for adaptation of 37 central laws in the concurrent list for J&K. In April, the ministry ordered adaptation of J&K’s state laws, now called Jammu and Kashmir Reorganisation (Adaptation of State Laws) Order, 2020. Out of 138 state laws, 25 have been repealed, while others have been adopted with substitutes. A domicile clause was included in the Jammu and Kashmir Civil Services (Decentralisation and Recruitment) Act. In the case of Ladakh, no such notifications have been issued.

"We are in a lawless state. The government should come up with laws safeguarding our rights," says Asgar Ali Karbali, former legislator from Kargil region.