NEET PG 2021 Counselling: The stir, led by the Federation of Resident Doctors' Association, has been going on for several days, and FORDA also said that several of its members were ‘detained’ when they tried to hold a protest march from Maulana Azad Medical College (MAMC) to Supreme Court. 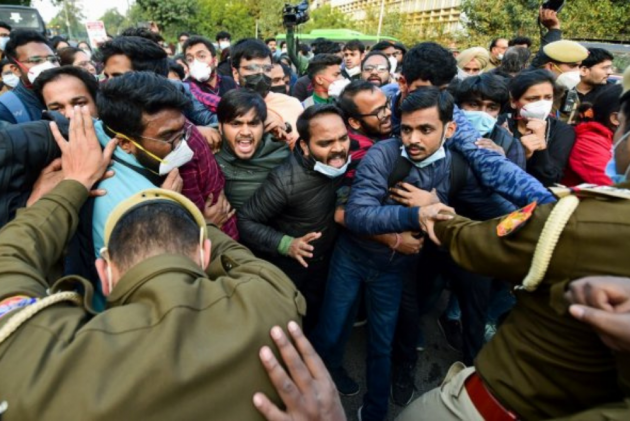 Protest by a large number of resident doctors in Delhi over the delay in NEET-PG 2021 counselling took a dramatic turn, as medics and police personnel faced off in streets, with both sides claiming several persons suffered injury in the ensuing melee.

The stir, led by the Federation of Resident Doctors' Association, has been going on for several days, and FORDA also said that several of its members were "detained" when they tried to hold a protest march from Maulana Azad Medical College (MAMC) to Supreme Court.

FORDA president Manish claimed that resident doctors of a large number of major hospitals on Monday "returned their apron (lab coat) in a symbolic gesture of rejection of services".

"We also tried to march from the campus of the Maulana Azad Medical College (MAMC) to Supreme Court, but soon after we had started it, security personnel did not allow us to proceed," he said.

However, police denied allegations of lathicharge or use of abusive language from their end, and said, 12 protestors were detained and released later.

In a statement issued later, FORDA said it was a "black day in the history of the medical fraternity".

"There will be complete shutdown of all ,healthcare institutions from today onwards," the statement said.

In an official statement issued later, Additional Deputy Commissioner of Police (Central) Rohit Meena said, on Monday, a group of resident doctors "without having any authorised permission" blocked the BSZ Marg, main road between ITO and Delhi gate, and jammed the traffic for more than six hours".

"They deliberately created nuisance on the main road and blocked both carriageways, causing hardship and harassment to commuters and general public," he claimed in the statement.

Subsequently, they were "addressed by DG Health" who gave them the assurance of fulfilling their demands, the senior police officer was quoted as saying in the statement.

However, they became "aggressive and even after pacifying them, they blocked the road", he claimed.

"After requesting them again to leave the road, they became aggressive and manhandled our personnel when efforts were made to detain them lawfully. Seven police personnel got injured while detaining them. They also broke the glass of police bus," he alleged.

FIR has been registered under relevant sections of Indian Penal Code for Covid violations, rioting and damage to public property among others, police said.

Later in the night, a large number of resident doctors gathered outside the Sarojini Nagar police station. But, no one has been detained as of now, police said.

However, doctors claimed that a large number of protestors were detained by police when they tried to march from Safdarjung Hospital to the official residence of Union Health Minister Mansukh Mandaviya.

"They are protesting and we are facilitating their protest...they are on a sit-in here. Let them first settle down and then we will initiate talks with them. It's likely that any immediate meeting could be arranged with officials concerned at night but we are trying are best to sort it out," a senior police officer from southwest district of the Delhi Police said.

Deputy Commissioner of Police (Southwest) Gaurav Sharma said that "Doctors were protesting and they were reconciled through negotiations. They were peacefully handled and sent back to their hostels."

In a video released by FORDA, a group of protestors can be seen singing the national anthem outside a police station, while one doctor can be seen telling a group that they should prepare to camp there all night to protest.

Later, a resident doctor said, after all detained doctors been released, "injured will go to hospitals, and rest all will be heading back, to regroup again tomorrow".

As the protest continued on Monday, patient care remained affected at three Centre-run facilities -- Safdarjung, RML and Lady Hardinge hospitals -- and some of the Delhi government-run hospitals.

Last Tuesday, a group of doctors had thrown flowers on security barricades, and clanged utensils and clapped in front of the Nirman Bhawan here, saying they were symbolically "returning" the adulation showered on them for being Covid warriors.