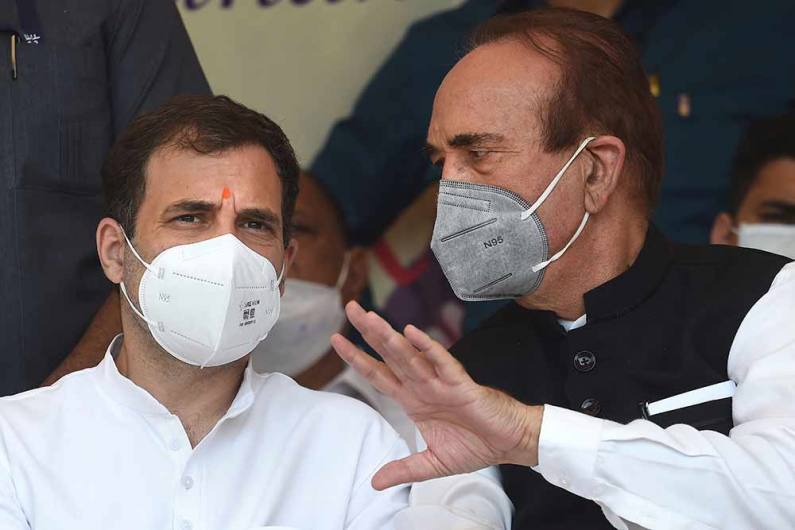 With Congress leaders Rahul Gandhi and Ghulam Nabi Azad ridiculing the BJP in Jammu for not taking up development projects forward and pushing Jammu and Kashmir towards economic regression and breaking its composite culture, the BJP has hit back saying only Congress is responsible for the crises in Jammu and Kashmir and the party is the root cause of separatism in J&K.

“Congress is the root cause of corruption, terrorism and separatism in J&K,” senior BJP leader and former Deputy Chief Minister of erstwhile J&K state, Kavinder Gupta said in a press statement in Srinagar.

“Exodus of Kashmiri Pandits took place under the nose of Congress rule in the country. Congress is responsible for the miseries of people in J&K as one fragment faced hardships due to exodus and the other confronted the ordeal due to terrorism sprouted by the ill-conceived and lopsided policies run by Congress in the region,” Gupta said.

“Had Congress played its role maturely during the early 1990s, the situation here would have been different with J&K touching the heights of progress,” Gupta said.

“Rahul Gandhi should do some homework before leveling baseless allegations as the onus of turmoil in Kashmir solely lies on his party’s leadership starting from Pt Jawaharlal Nehru, who gave a nod to special status to J&K under Article 370. It is Congress that divided the society in J&K by tacitly supporting the exodus of Kashmiri Pandit,” he added.

“It is painful that instead of playing a constructive role in healing the wounds of Kashmiris whether Hindus, Sikhs or Muslims, Rahul has come to J&K with the noxious mindset to again sow hatred in between different circles of the society making situation difficult for the government, which has achieved a lot in restoring pristine glory of J&K by ensuring peace and progress as never before”, Gupta said,

Congress leader Rahul Gandhi Friday said the BJP and the RSS are breaking the composite culture of Jammu and Kashmir and called for the restoration of statehood.

“I am feeling sad that the BJP and the RSS are trying to break the composite culture of Jammu and Kashmir. This makes you weak,” he had said addressing Congress workers in Jammu. He said the BJP took away the statehood of Jammu and Kashmir and weakened people economically. He said the government should restore the statehood of Jammu and Kashmir.  He said a delegation of Kashmiri pandits visited him and informed him that the Congress party during its rule implemented various welfare schemes for pandits but the BJP did nothing. He said BJP had promised them compensation of Rs 25 lakh but they weren’t given anything. He said he promised them he would do something for Kashmiri pandits.