The government will also launch a common entrance test, as proposed under the National Education Policy 2020, from next year for central and other universities who are willing to join the new system. 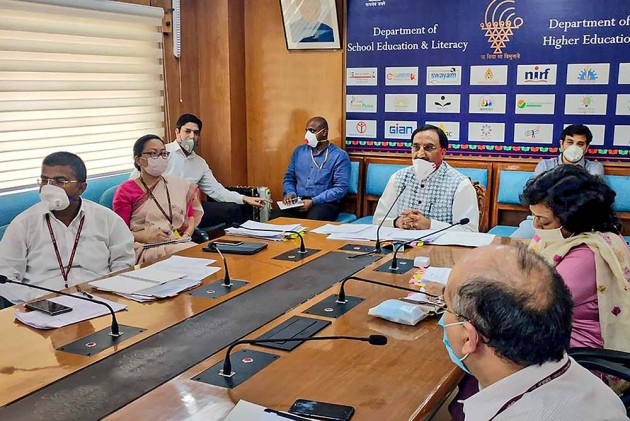 The Union government will roll out the proposed four-year multidisciplinary undergraduate and one-year master’s degree programme in 20 Institutes of Eminence (I0Es), some of the central universities and other higher education institutions from the next academic session starting 2021.

It will also launch a common entrance test, as proposed under the National Education Policy (NEP) 2020, from next year for central universities and others who are willing to join the new system. It will be voluntary for the universities to accept the scores of the entrance test.

For the roll-out of the four-year multidisciplinary undergraduate and one-year master’s degree programme from the next academic session with multiple entry and exit options for students, the Union Education Ministry has already begun the work towards the creation of an academic bank of credit.

“We have discussed this with some of the IITs. Since we already have a very solid Aadhaar base all over the country and a system of DigiLocker, they can ensure creation of a robust system for academic credit bank,” Higher Education Secretary Anit Khare said while sharing the NEP implementation plans of the ministry at a webinar organized by the FICCI on Monday.

Testing of the proposed academic credit bank will be done before December this year so that the four-year undergraduate and one-year master’s progranmes can be operationalised from the next academic session, starting 2021, he added.

To facilitate students with multiple entry and exit options, the NEP has proposed for setting up an academic 'bank of credit' for digitally storing academic credits earned by the students so that these can be transferred and counted towards final degree.

Khare said that the two programmes can be offered by any university—be it public or private—who are willing and have capacity to run the programmes.

“The NEP does not discriminate between public and private universities. Such distinction will also go with the implementation of the NEP,” he added.

To change the current regulatory mechanism as recommended by the NEP, the higher education secretary said, the Education Ministry has readied a draft bill for the establishment of an overarching body, Higher Education Commission of India (HECI), with its four independent verticals for distinct functions of regulation, accreditation, funding, and academic standard setting.

“We will put this bill in public domain by the end of September for comments and suggestions before we go ahead with this bill,” he said.

On the implementation of the NEP recommendation for granting graded autonomy to the colleges, Khare said, the rules being worked out for this will not discriminate between public and private universities and confer autonomous status on those which have been graded as A+ by the National Assessment and Accreditation Council (NAAC).

On securing autonomous status, a college will have powers to award degrees and run their own programmes.

Khare said that work was going on to bring a new regulation to allow autonomous institutions and also those graded as ‘A’ by NAAC to start new multidisciplinary programmes without any approval from any regulatory body or the education ministry.

“No distinction will be made between the type of the management of the institutions," he said, making it clear that private colleges with ‘A’ and above NAAC grading will also be eligible to start new multidisciplinary programmes without requiring any prior approval.

Khare said that a clear road map with a time frame for the implementation of the NEP will be ready by the end of this month.

“We are going to issue a complete set of recommendations. We will bring the action plans in public domain so that the vice-chancellors can comment and assist us in implementing the policy,” he added.