The hour-long interaction between the prime minister and the 'Khiladi' star, broadcast on Wednesday, was on a non-political theme, delving into the life of Narendra Modi as the Prime Minister. 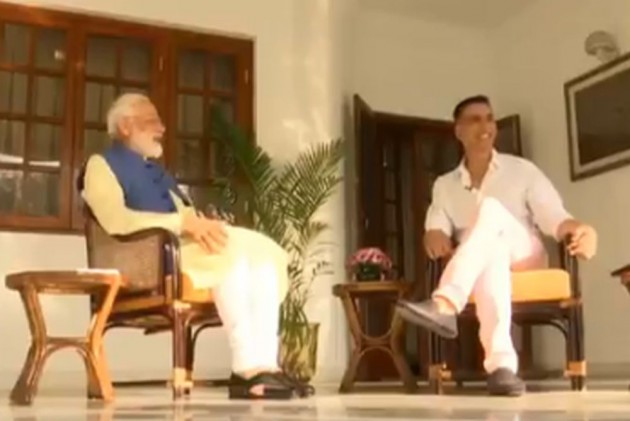 In a candid non-political interaction with actor Akshay Kumar, Prime Minister Narendra Modi said that he never dreamt of becoming Prime Minister because there was nothing in his background that could make him think like that.

"But my family background is one like if I would have got a good job, my mother would have distributed jaggery to the neighbours because we never thought beyond that. We never saw anything outside our village," Modi said.

"This journey just started and the country accepted me. Responsibilities also came to me automatically. As per my personal view, this (becoming Prime Minister) is unnatural because my life and world does not fit in current political atmosphere," he added.

PM Narendra Modi's Interview To Akshay Kumar: Why Mamata Banerjee Is Not An 'Enemy'

"I always wonder how the country loves me and gives me so much," Modi told Akshay in an interaction at his 7 Lok Kalyan Marg residence.

"I am surprised that so many people are giving me love and respect," he added.

PM said that it was during the 1962 war with China that he was inspired to work for the country and join the armed forces. He then also revealed that he thought of becoming a sanyasi after being influenced by the Ramakrishna Mission - founded by Swami Vivekananda - for one's own salvation and for the welfare of the world.

The hour-long interaction between the prime minister and the 'Khiladi' star, broadcast on Wednesday, was on a non-political theme, delving into the life of Narendra Modi as the Prime Minister.

The actor also asked Modi about his daily routine, besides his responsibilities, his love for mangoes and his sleep schedule.

Kumar started off asking the Prime Minister about his epic love for mangoes. Modi got all nostalgic and told him about how he used to enjoy mangoes as a child. However, now as the Prime Minister he has to be careful and needs to keep a tab on his diet.

Few minutes before the talk went live, a small clip was aired on Instagram. Here, the 51-year-old actor spoke to Modi about his sleep schedules.

A few hours after the third phase of the Lok Sabha elections voting concluded, Kumar made an announcement on Twitter that he would be engaging in a "candid and completely non political" interaction with Prime Minister.

He said that the chat would offer a "breather" to the Prime Minister amid his hectic campaigning schedule. He also said that the conversation will help viewers "discover" some facts about Modi.