I want to assure you that you will come to see a good hill council: Gyalson at swearing-in ceremony in Leh. 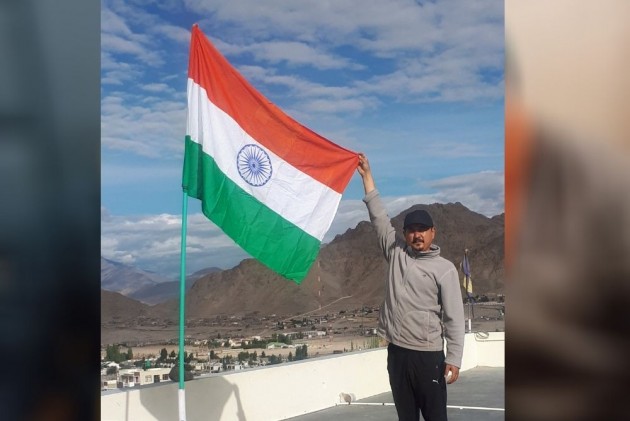 BJP leader Tashi Gyalson was unanimously elected as the chief executive councillor (CEC) of the Ladakh Autonomous Hill Development Council (LAHDC), Leh, on Saturday. After being elected, Gyalson told reporters that he would be working for the welfare of the region and people will see a "new Ladakh" in the coming days. He said Ladakh is no longer under districts but a Union Territory now and it has new opportunities and challenges as well.

Gyalson, who became the first LAHDC, Leh CEC, after Ladakh was made a Union Territory, said executive councilors of the body will be nominated soon.

He thanked the people for reposing faith in the BJP. “I want to assure you that in the coming days you will come to see a good hill council,” Gyalson told reporters after the swearing-in ceremony in Leh.

He said in next five years, the responsibility on the LAHDC Leh to be increased as Ladakh is now a Union Territory. He said there are a number of challenges as the LAHDC, Leh is also the first council after the region was granted the UT status. “We would do everything to work for the welfare of the people,” he said.

Gyalson was earlier with the Peoples’ Democratic Party but later joined the BJP.

Earlier after winning the election on October 26, he had said the elections at LAHDC Leh were not difficult polls for the BJP. The work done by the previous BJP council was enormous and it was natural for the BJP to get reelected. He also said, the LAHDC Leh since 2015 has done a great developmental work. He recalled, at the same time this year a 70-year-old demand of the region to have Union Territory was granted by the government in August last year. He said he was expecting a good number of seats but local factors played the part.

The BJP won 15 out of 26 seats in the 6th LAHDC, Leh elections. The Congress won nine seats and two were bagged by the independents.

The regional parties National Conference (NC) and the Peoples Democratic Party (PDP) had stayed away from the electoral process but the Aam Aadmi Party (AAP) fielded 19 candidates. The AAP did not win any seat.

Tsering Angchuk who was elected as the deputy chief executive councilor said that he would take along all parties and members of the council to work for the welfare of Ladakh region.

The LHDC, Leh was constituted in accordance with the Ladakh Autonomous Hill Development Council Act of 1995 during PV Narasimha Rao's government, and its first election was held in 1995. Later during Mufti Mohammad Sayeed-led PDP rule in 2003, similar council was established for Kargil district. The LAHDC Leh and the LAHDC Kargil were functioning in truly independent manner in the erstwhile state of J&K.

However, after abrogation of Article 370, many in the region are complaining that their powers are being undermined. Even though the Leh region welcomed Union Territory status unlike Kargil, they are now concerned about demography of the region. Ahead of the present LAHDC, Leh polls, prominent political leaders, political parties including the BJP and religious monks from the region formed the Peoples Movement of Ladakh demanding constitutional safeguards for locals of the region under Sixth Schedule of the Constitution.