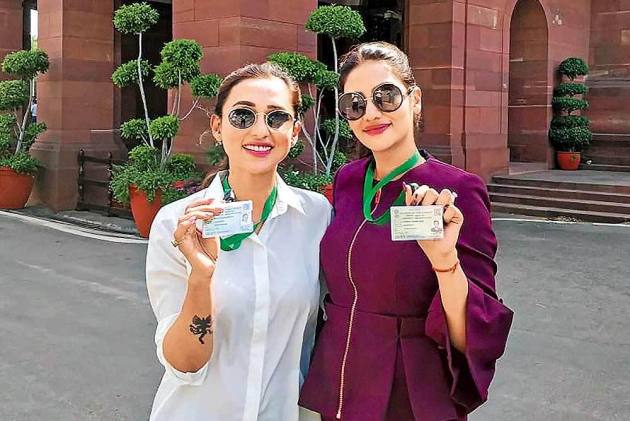 Newly-elected TMC MP and actor Nusrat Jahan, whose stand on religion and inclusiveness is "in sync" with the ISKCON's spirit of "social harmony", has been invited as a special guest at the inauguration ceremony of the Kolkata ISKCON Rathayatra on Thursday.

Thanking Jahan for accepting the invitation, ISKCON spokesperson Radharaman Das said, the actor represented an "all inclusive India" and was "really showing the road forward".

The 48th edition of the Rathayatra organised by the International Society for Krishna Consciousness (ISKCON) since 1971, will be inaugurated by Chief Minister Mamata Banerjee.

Jahan, who got married to a Kolkata-based businessman, and was heavily trolled for wearing vermilion and sporting a 'mangalsutra' at her oath-taking ceremony, had said, she represents an "inclusive India... which is beyond the barriers of caste, creed and religion."

The actor and her husband will be present at the inauguration ceremony along with other film stars.

"Nusarat Jahan represents new India... an all inclusive India. Respect for others religious beliefs and participation in their festivities will make India great again. This is what India stands for and youth like Nusarat Jahan are showing the path forward," Das told PTI.

"A society where there is freedom for all to choose responsibly is a happy society. That freedom has been given by God to all. So, we the people should not be one to snatch that freedom from anyone," he added.

In a tweet, Das had earlier said: "Thank you @nusratchirps for accepting the Rathayatra invitation. You are really showing the road forward."

In a video released on Monday evening, the actor congratulated ISKCON for organising the Rathayatra, and asked the residents of the city to join her at the inauguration, and be with her through the celebrations.

Refusing to toe the line of hardline Muslim clerics who had criticised her, the first-time MP from West Bengal's Basirhat had said, "... I still remain a Muslim... And none should comment on what I choose to wear... Faith is beyond attire."

A section of Deoband-based clerics have reportedly issued a 'fatwa' (diktat) against the Trinamool Congress lawmaker.

Supporting the actor, Das said fundamentalism and manufactured supremacy must be condemned.

"Everyone has the freedom to preach and others have the freedom to accept it or reject it. All kinds of fundamentalism and manufactured supremacy should be condemned. God preaches love for all," Das said.

"This is what the festival of Rathayatra represents. The lord comes out to bless everyone and not only Hindus," Das added.

This years yatra will highlight the condition of senior citizens who spend their lives away from family members at old age homes, Das said.

The Rathayatra is expected to attract lakhs of devotees, who will pull the chariots of deities of Lord Jagannath, Balaram, and Subhadra on the occasion, he said.

Starting from the city's Hungerford Street opposite the ISKCON temple at Albert Road, the yatra will move through important thoroughfares of the city to reach Brigade Parade Grounds, where arrangements have been made for the people to have a special darshan of Lord Jagannath till July 11.

Groups of devotees from south India will be present in front of the three chariots to make street art with organic 'gulals'.

Internationally famous 'kirtaniyas' will render 'kirtans' (devotional songs) to the accompaniment of drums and 'kartals' (percussion instrument) during the yatra.

The 'Ultarathayatra' will start on July 12 noon when the chariots will return to the Albert Road temple.