Nihangs: All You Need To Know About This Sikh Sect

Despite growing power of the Sikh misls (fighting units) in the 18th century, the Akali Nihang bands continued to renounce power and cultivated self-discipline and austerity. 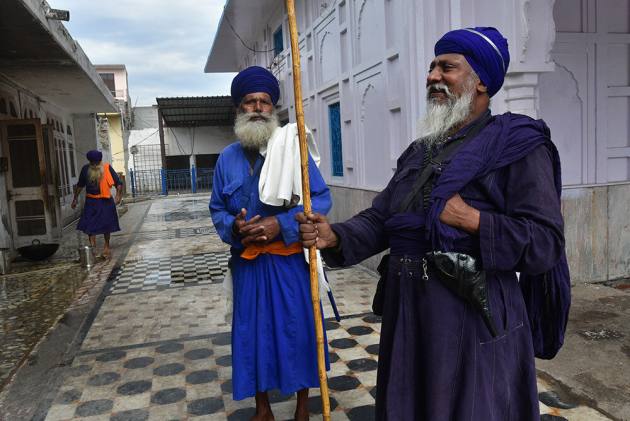 The lynching of a man on the Singhu border by Nihangs over the alleged desecration of the Sikh holy book has brought the Nihangs in news. Outlook tells you all that you needed to know about the Nihangs.

Q. Who are the Nihangs?

Ans. They are a distinctive order among the Sikhs and are identified with their loose, dark blue, apparel and their plumed turbans. They are always armed with swords, daggers, spears and sometimes guns. They see themselves as Guru Ki Fauj (the Guru’s army) and have their autonomous practices.

Q. What does the word Nihang mean?

Ans. “Etymologically, the word Nihang is traced back to Persian Nihang (alligator, sword) or to Sanskrit Nihsanka (fearless, carefree). The word could also be a modified form of Nisang often used in the Sikh scriptures to mean nirlep (unsmeared, sinless, not attached to anything),” says the chapter on Nihangs in the Encyclopedia of Sikhism edited by Harbans Singh.

Q. How did the Nihang order, and its attire, come into being?

Ans. There are also various theories of the origin of this martial order. One is that Guru Gobind Singh’s infant son Fateh Singh appeared before him in a deep blue chola and a large, blue, plumed turban, making the Guru remark that this should be the dress of the Akalis, the soldiers of God. Another theory is that after his escape from Chamkaur, the Guru donned a blue dress as a disguise. He burnt it on reaching village Dhilvan near Kot Kapura in December 1705, but his attendant Man Singh saved a small piece of the blue cloth and stuck it on top of his turban as a mark of respect. Another version is that Naina Singh Akali of the Nishananvali misl (Khalsa fighting unit) introduced a tall, plumed, turban, which later became the Nihang attire.

Q. How did they become a prominent order among the Sikhs?

Despite growing power of the Sikh misls (fighting units) in the 18th century, the Akali Nihang bands continued to renounce power and cultivated self-discipline and austerity. This offered them prestige and autonomy even when Maharaja Ranjit Singh founded the Sikh kingdom. Impressed by their valour and discipline, the Maharaja made them join a special wing of his army, as they would not accept salary. Nihang wings carried out daring expeditions in the battles of Kasur (1807), Multan (1818), Kashmir (1819) and Nowshera (1823) on behalf of the Sikh kingdom.

Q. What were their relations with the Mughals and the British?

Ans. The Encyclopedia of Sikhs says they faced persecution during the times of the Mughals as also in British rule, which they were openly antagonistic to. “The process of suppression had in fact started even before the annexation of the Punjab in 1849. In 1848, a Nihang leader, Ganda Singh, who refused to vacate one of the minarets adjoining the Golden Temple, was arrested along with his men, and taken to Lahore,” says the encyclopedia, edited by Prof Harbans Singh. “Ganda Singh and two of his companions were sentenced to death and the rest were imprisoned for seven years.”

Ans. They rise early in the morning and recite nitnem (daily prayers), which include banis from Guru Granth Sahib, the Dasam Granth attributed to Guru Gobind Singh and the Sarab Loh Granth, which depicts the fight between good and evil; between the all-steel incarnation of God and Brijnad, the king of demons. They recite with passion Guru Gobind Singh’s Chandi Di Var, describing the battle between the gods led by Goddess Durga and the demons.

They tend to their horses, on which they travel long distances. They also tend to their cattle. Nihangs never smoke and dislike anyone smoking in their vicinity. They eat meat, but are supposed to slaughter the animal themselves and not buy meat from the market. All their weapons and utensils are of steel.

Q. How are the Nihangs organized?

Ans. They are organized into Dals (forces). The Buddha Dal and the Taruna Dal are the most prominent. If there is a saying that one Khalsa is equal to sawa lakh (1,25,000) – a popular saying among the Sikhs – the Buddha Dal of Nihangs is called 96-karori (an army equaling 96 crores).

Q. Do they have a reclusive existence or are they involved in social activities too?