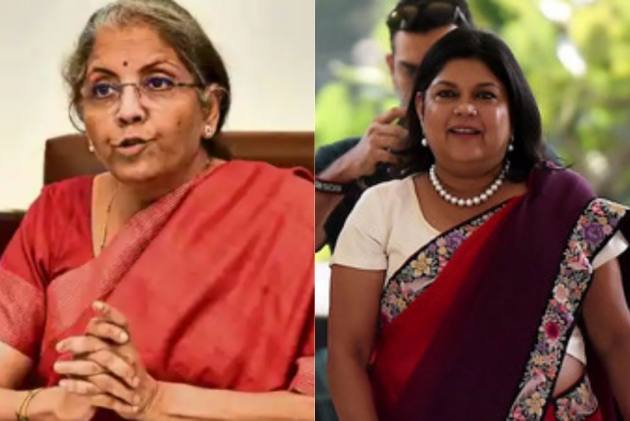 Year 2021 saw Indian women from different walks of life making headlines with their soaring aspirations, breaking through the gender-ceiling every now and then. On this context, it’s imperative to mention that Finance Minister Nirmala Sitharaman made it to the Forbes World’s 100 Most Powerful Women for the third time in a row. Following Sitharaman, three other Indian women and entrepreneurs including Roshni Nadar Malhotra, Kiran Mazumder-Shaw and Falguni Nayar also became the most powerful women of the world.

Every year the American magazine releases a list of 100 powerful women across the world and the 18th edition, this year, featured 40 Chief Executive Editors (CEOs).

Let’s have a look at the four Indian women listed under Forbes 100 Most Powerful Women:

Union Finance Minister Nirmala Sitharaman needs little to no introduction, to say the least. This year Sitharaman has been ranked at 37, up from last year where she was placed at 41. She is also two spot ahead of her American counterpart Janet Yellen. However, in 2019 she was at a higher rank with the 34th position.

Sitharam is the first-full time female finance minister of India. Earlier, Sitharaman served as the Union Defence Minister under the Bharatiya Janata Party and became the second Indian women to act as the defence minister after Indira Gandhi. She has been a member of the Rajya Sabha since 2014. She has also served as a member for the National Commission for Women.

Hailing from Tamil Nadu, Sitharaman completed her education from Jawaharlal Nehru University and moved to London, where she even worked with the BBc for a short while.

Joining the ruling Bharatiya Janata Party in 2008, Sitharaman soon became the party’s national spokesperson in 2014 and continued to remain so till 2014.

Creating a lot of buzz, founder of Nykaa, one of India’s biggest online fashion and lifestyle portals, Falguni Nayar became India’s richest self-made woman in November, early this year. Ranked at 88 in Forbes World’s 100 Most Powerful Women, the 55-year-old billionaire has become an inspiration for hundreds of women, killing stereotypes in her ways. She is currently the among the top 20-richest people in India.

Based out of Mumbai, Falguni Nayar founded Naykaa in 2012, months before her 50th birthday. In the initial years, the e-company was completely funded by Nayar and her husband, Sanjay Naya, the chairperson of a private equity major KKR & Co. as Falguni Nayar wanted to “make the metrics happen”. Since then the company has grown and expanded in leaps and bounds. From selling third-party beauty products to launching its own brands, Nykaa has steadily entered the fashion business.

Born and brought up in Gujarat, Nayar, once in an interview, had said that most of household chatters would be around investments, market and stocks.

A graduate from Indian Institute of Management, Ahmedabad, Nayar spent a good number of years at Kotak Mahindra and resigned in 2012.

Ranked at 52 in Forbes 100 Most Powerful Women, Roshni Nadar Malhotra is the CEO of HCL Corporation and Chairperson of the HCL Technology. The only daughter of HCL founder and billionaire Shiv Nadar, Roshni became the richest Indian woman in 2019, according to the IIFL Wealth Hurun India Rich List.

The first woman to lead an IT firm in India, Roshni is well-known for her philanthropic activities. Before taking charge of HCL, she served as the company’s vice-president and it was during this time, she backed HCL’s $1.8 billion purchase from IBM of a portfolio of its products. The acquisition, which closed in 2019, was reportedly the biggest by value in the company’s 30-year history.

Born and brought up in Delhi, Roshni earned a degree in Communication from Northwestern University in US and then completed her MBA from Kellogg School of Management, US.

Passionate about wildlife and conservation, Roshni founded The Habitats Trust in 2018 that aims to work toward protecting the country’s natural habitats and its indigenous species through strategic partnerships with stakeholders, reads HCL’s website.

Ranked at 72, Kiran Mazumdar-Shaw founded India's largest listed biopharmaceutical firm by revenue, Biocon Limited, in 1978, according to a report by Forbes. The company has Asia’s largest insulin factory in Malaysia’s Johor region.

The 68-year-old billionaire is the recipient of the Othmer Gold Medal in 2014 for her outstanding contributions to the progress of science and chemistry. She was also awarded the Padma Shri in 1989 and Padma Bhushan in 2005.

Born and brought up in Bangalore, Mazumdar reportedly wanted to be doctor. However, she could not make it through a medical college. She set up the Mazumdar Shaw Medical Center in Bengaluru that aims at creating a sustainable, affordable cancer care model.

She earned her bachelors degree from the Bangalore University and a master’s degree in science from Melbourne University, Australia. Mazumdar holds several honorary doctorates from several national and international universities.