Kumar's comments came on a day when Yogi said, "Modiji has found a solution to the infiltration problem in the form of the CAA (Citizenship Amendment Act)". 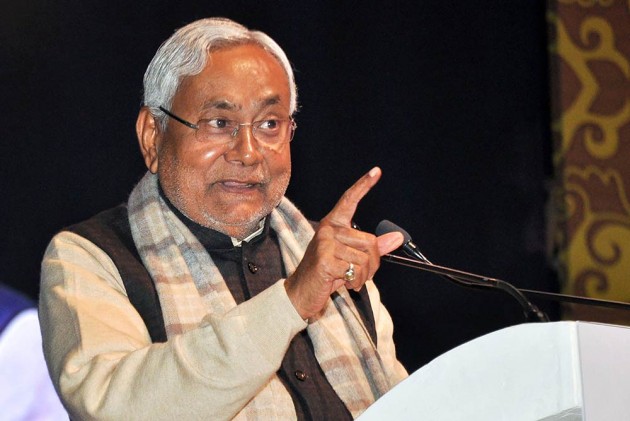 NDA partners BJP and the JD(U) appear divided on the contentious new citizenship law, with Uttar Pradesh Chief Minister Yogi Adityanath asserting illegal immigrants will be thrown out of the country and the alliance's face for Bihar Nitish Kumar calling such talk "faltu baat".

Notes of dissonance emanated from the JD(U)-BJP stable on Wednesday when Bihar Chief Minister Nitish Kumar expressed displeasure over the hard line adopted by some in the coalition over illegal immigration, comments seen as a rebuff to his Uttar Pradesh counterpart Yogi Adityanath.

Kumar, who heads the Janata Dal (United) and enjoys the support of a section of the state's Muslims, frowned upon the "faltu baat" (rubbish) at rallies in Araria and Kishanganj districts on Wednesday. Both districts have a heavy concentration of the minority community.

"Who are these people indulging in faltu baat... that people will be thrown out of the country? Ever since you have given us a chance to serve, we have taken all people along. Who is going to throw you out? Everybody belongs to this country," Nitish said at the rallies.

The chief minister also shared the relevant clip of his speech on his official Twitter handle later in the day with the caption in Hindi: "It is our Dharma to take everybody along. This is our culture. Bihar will progress only when all stay together."

Kumar's comments came on a day when Yogi, a firebrand BJP leader and one of the party's star campaigners, said at a rally in Katihar, "Modiji has found a solution to the infiltration problem in the form of the CAA (Citizenship Amendment Act)".

"He has ensured that all those who have fled Pakistan, Afghanistan and Bangladesh following religious persecution feel safe here. On the other hand, those infiltrators who try to undermine the sovereignty and integrity of the country will be thrown out," Yogi had thundered, evoking wild applause from the crowds.

There are apprehensions that Yogi's utterances, in a district situated close to the Indo-Bangladesh border, could stoke fresh apprehensions among the minorities, who fear the CAA could be a precursor to a country-wide National Register of Citizens (NRC) which could lead to their disenfranchisement.

The JD(U), which had initially fumbled and ended up supporting the Citizenship (Amendment) Bill in both Houses of Parliament months after opposing the legislation, later sought to undo the political damage by getting a resolution passed in the Assembly declaring that there was no need for a countrywide NRC, which has so far been limited to Assam.

The resolution was passed unanimously with more than 50 MLAs of the BJP present in the House backing it.