On Thursday, AIMIM legislators, led by their state president Akhtar-ul-Iman called on Nitish Kumar purportedly to discuss the underdevelopment of the Muslim-dominated Seemanchal region. 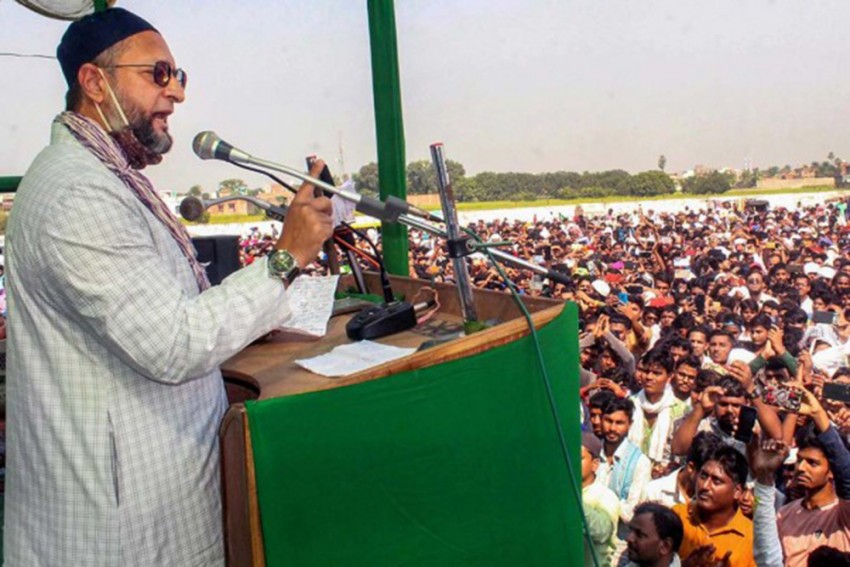 All the recently-elected five legislators of All India Majlis-e-Ittehadul Muslimeen (AIMIM) had an ‘unexpected’ meeting with chief minister Nitish Kumar, triggering speculations that they might switch their allegiance to the ruling party ahead of the Cabinet expansion in Bihar.

On Thursday, AIMIM legislators, led by their state president Akhtar-ul-Iman called on Nitish at 1, Aney Marg, the chief bungalow in Patna, purportedly to discuss the underdevelopment of the Muslim-dominated Seemanchal region from where they were all elected in the last state assembly elections. But sheer timing of their meeting appears to have prompted the political pundits to believe that there is more than what meets the eye.

The meeting has taken place ahead of the eagerly-awaited expansion of the Nitish government. Given the chief minister’s reputation of being a charmer (read poacher) for the legislators of smaller parties and independents over the years, AIMIM chief Asaduddin Owaisi has a reason to be wary of the latest developments.

Interestingly, Nitish did not only meet the AIMIM legislators but also Raj Kumar Singh, the lone legislator of Chirag Paswan’s Lok Janshakti Party (LJP). And all these meetings have taken place shortly after the only MLA of Mayawati’s Bahujan Samaj Party (BSP) Jama Khan switched allegiance to JD-U. Also, an independent Sumit Singh announced his support to JD-U. There are also talks that both leaders might be accommodated in the Nitish government.

Against this backdrop, Nitish’s meetings with AIMIM and other MLAs are being seen as too politically significant to ignore in the state. After all, Nitish has had a history of throwing the doors of his party open rather liberally for the legislators of other parties. He had inducted many of them into JD-U even while his party had a brute majority in the assembly. It all began after the February 2005 Vidhan Sabha assembly polls in Bihar, which had thrown a hung House. At that time, Nitish had managed to wean several legislators away from the late Ram Vilas Paswan’s Lok Janshakti Party, which had emerged as “kingmaker”. Many of them went on to contest the next state elections in November 2005 on the JD-U ticket.

In 2009, LJP MLC Sanjay Singh, who was considered a confidant of Paswan, also joined JD-U. Ahead of 2010 assembly polls, LJP’s lone Muslim MLA Izhar Ahmad joined Nitish’s party. Between 2011 and 2014, all the three LJP MLAs – Pramod Kumar Singh, Naushad Alam and Zakir Hussain Khan – jumped on the JD-U bandwagon at different times. Later, three MLCs of LJP – Rajendra Rai, Israeel Rayeen and Raju Yadav – crossed over to the ruling party as well. After the 2010 polls, the lone Jharkhand Mukti Morcha MLA, Sumit Singh, who has won as an independent this time, had also joined JD-U.

Political analysts believe that JD-U has more than one reason under the present circumstances to induct the MLAs from other parties, especially those from AIMIM. It had won only 43 seats in the 243-member Vidhan Sabha in the last assembly elections and needs to strengthen its numerical strength to pre-empt any defection in the future. Also, it needs to improve its position in the Seemanchal area. Any defection from AIMIM or, for that matter, a possible tie-up with Owaisi’s party in the future may well work as a veritable bulwark against the BJP’s bid to marginalise Nitish in the state.

The BJP, which has emerged as the big brother in National Democratic Alliance after winning 74 seats in the assembly elections, has brought former Union minister Syed Shanawaz Hussain back to his home state.

Even though he has been made an MLC of the party, it is believed that he might also be inducted in the ministry and will play a key role within the alliance. By projecting him as the Muslim face of the party in Bihar, BJP appears to be hoping to make its presence felt in the Seemanchal region, where AIMIM has emerged as a major force now.

Therefore, the JD-U’s apparent overtures to AIMIM legislators are being considered to be Nitish’s subtle counter move and a well-thought-out political investment for the future, if not for any immediate gains, in Bihar.