Nitish Wishes Speedy Recovery to Lalu, Hints Regret For Not Being Able To Call Him

The soft corner Nitish Kumar had displayed for Lalu Prasad during his illness in 2018 had triggered speculations that he was feeling uneasy in the BJP-led coalition. 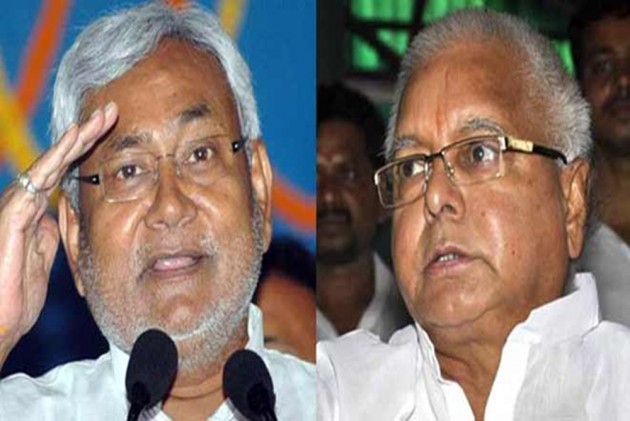 The two leaders have shared a love-hate relationship for close to five decades.

The JD(U) de facto leader also rued the fact that he now had to remain content with news about the ailing RJD supremo gathered from newspapers since his telephonic enquiries about the latters health in the recent past had triggered a controversy.

"It is my fervent wish that he gets well as soon as possible", Kumar told reporters here when asked about Prasad whom he had dethroned in 2005, less than two decades after having supported his ascent in the state's politics.

The chief minister was talking to journalists outside the JD(U) state headquarters here, where he had gone to pay tributes to former Chief Minister and OBC stalwart Karpoori Thakur on his birth anniversary.

Both Kumar and Prasad consider Thakur to be their political guru.

With a hint of regret in his voice, Kumar added: "I used to frequently call up his personal attendants and enquire about his well-being when he had similarly fallen ill in 2018. So many things were said about me because of that".

Notably, in 2017 Kumar had abruptly walked out of the coalition he had formed with the RJD and the Congress and formed a new government with the BJP.

The soft corner he displayed for Prasad during his illness had triggered speculations that he was feeling uneasy in the BJP-led coalition and seeking a rapprochement with the RJD chief.

Their bitter rivalry notwithstanding, Kumar has often displayed his personal affection for Prasad against whom he pulls no punches in the political arena.

Recently, while admonishing his son Tejashwi Yadav for impudence on the chief minister had underscored that he has been too charitable with the 31 years old, who was also his former deputy, because he was "mere bhai samaan dost ka beta" (the son of a friend, dear to me like a brother).

Replying to queries about the states budget for the next financial year, which is scheduled to be tabled in the assembly on February 22, the chief minister said the people of Bihar may look forward to more development and many new schemes besides completion of the existing ones.