The Nizamabad Lok Sabha constituency, where polling is underway on Thursday along with 16 other constituencies in Telangana, may make it the Guinness World Records for the maximum number of Electronic Voting Machines (EVMs) used. 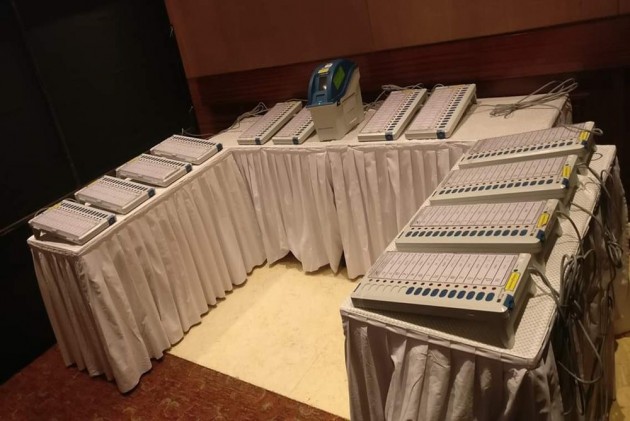 The Nizamabad Lok Sabha constituency, where polling is underway on Thursday along with 16 other constituencies in Telangana, may make it the Guinness World Records for the maximum number of Electronic Voting Machines (EVMs) used.

With 185 candidates, a majority of them farmers, entering the fray, the Election Commission is using 12 EVMs in each polling station.

The polling in this constituency began at 8 a.m., an hour after the process began in the remaining constituencies.

"The polling is going on smoothly barring at two-three places where EVMs were replaced. In the first hour, 3.6 percent polling was recorded," he said.

The EVMs of M3 version were arranged in 'L' shape with each machine carrying a maximum of 16 names.

As many as 178 farmers filed the nominations to highlight the demand for remunerative prices for turmeric and red jowar, posing a challenge for the Election Commission.

With 185 candidates in the fray, it was thought the Election Commission will have to go for ballot papers as a normal EVM can accommodate a maximum of 64 names.

However, the poll panel decided to use the EVMs with latest technology developed by the Electronics Corp of India Ltd (ECIL). The public-sector company was asked to immediately supply 26,820 EVMs, 2,240 control units and 2,600 VVPATs of M3 make.

After the supply of the machines, the authorities faced another challenge of installing them with 12 EVMs connected to one control unit and train the polling staff keeping in view the special requirements of the constituency.

"It was a challenge as 600 engineers from ECIL and BEL and 1,200 other people worked day and night to make all the arrangements," said Rajat Kumar.

At the polling centres, the officials installed flexi board with the serial numbers, names, photographs and symbols of the candidate to enable the voters to easily locate their choice.

The poll officials have informed the local representatives of Guinness World Records about the use of record number of EVMs. They may visit the constituency on Thursday or later as EVMs will be stored in strong rooms for six months after the declaration of results.

Some of the farmers contesting the polls had approached the High Court, seeking postponement of polls citing the delay in allocation of poll symbols. The court, however, refused to stay the poll process.

The farmers also held a rally on the last day of the campaign and decided to vote among themselves to teach a lesson to the mainstream parties which failed to address their problems.

The constituency has a little over 15.53 lakh voters including 3.73 lakh farmers .