'No 56 Can Stop You': Karti Takes A Dig At PM Modi As He Wishes Chidambaram On Birthday 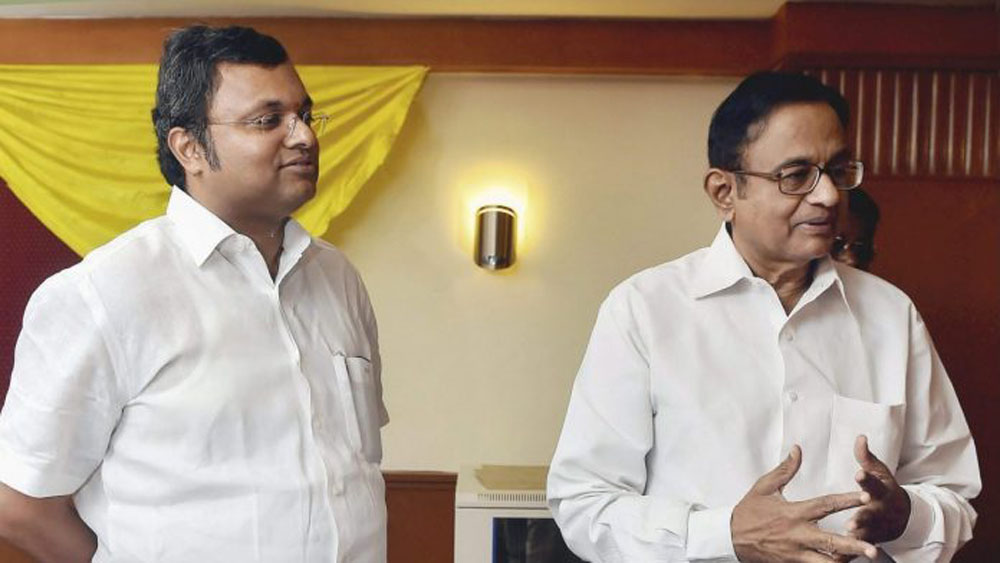 P Chidambaram, currently in jail, turned 74 on Monday and his son Karti Chidambaram penned a letter to the former Finance Minister and senior Congress leader apprising him of current affairs while taking a dig at Prime Minister Narendra Modi-led central government stating that "no 56 can stop" him.

"You are turning 74 today and no 56!!! can stop you. Although you have never been one for grand celebrations, and nowadays in the country, we seem to be making grand celebrations out of every little thing; your birthday is not the same without you with us. We miss you, your absence tugs at our hearts, and we wish you were back home to cut a cake with all of us," Karti wrote on Twitter.

Also mocking the celebration around PM Modi's 100 days in government, Karti said, "in today's days and age, turning 74 is nothing compared to turning a 100 days old."

He added, "I am glad I got to see you and know that your spirits are high despite everything."

Karti also went on to highlight various topics in the news.

While talking about Chandrayaan-2, he said, "We were fortunate enough to be watching the event LIVE with a great sense of pride, and there was much drama. No, not the drama of the lander losing communication, but the big drama a little after that.

"ISRO Chief Dr Sivan, our fellow Tamilian from Kanyakumari, was visibly upset, and the Prime Minister was at hand to offer his arms and comfort him with his iconic head grab. I sincerely hope our Prime Minister pegs the achievements of our ISRO scientists a little above what his Bhakts believe - that India's Space Programme, along with plastic surgery and aviation was created thousands of years ago ... and not by ISRO" Karti wrote.

While talking about Union Minister Piyush Goyal, who earlier said that one should not be concerned with GDP maths as maths never helped Einstein discover gravity, Karti said, "Piyush Goyal even snatched the theory of Gravity away from Newton and pooh-poohed Einstein. But I must say it must be rather relatively easy for Bhakts to get confused between the two."

"Celebrating how wonderfully the GDP is at a 6-year low of 5 per cent as you defiantly pointed out; What an achievement that auto sales have fallen for the 10th month in a row; And of course patting themselves on the back for the Sensex crashing to its biggest fall in 2019 earlier this week. I'm sure you would have greatly appreciated your successor twice removed Nirmala Sitharaman's astute insight that the economic slowdown has been principally caused by the millennial's preference for ride-sharing apps," he wrote.

Karti also talked about the situation in Jammu and Kashmir, "Great news in Kashmir. Centre has announced its plans to procure apples from growers in the Valley. Kashmir's been under lockdown for over 40 days and the government has decided to give apples their freedom. What next, Carpets?"

He added, "Only you will understand the true plight of the Kashmiris. Because both of you have been locked down unfairly. Though you are far better off than the people of Kashmir who are still under a government-imposed communication blackout. My heart goes out to all the families who wait all day outside Srinagar's government establishments to meet the illegal detainees."

He then apprised P Chidambaram of the British Parliament.

"Boris Johnson seems to be taking lessons from our PM - How to Deal With Dissent 101... It takes great courage to protest against a sitting government, especially one that wants to send you straight to Pakistan if you utter a word of dissent or worse, into the arms of the CBI or ED," he wrote.

Talking about the NRC in Assam, Karti said that the first NRC has left the government "clutching at straws."

"What not enough Muslims? Let's relook at the data, after all, data these days is a tinkerable commodity, as are facts. I have to applaud the government for being extremely imaginative and creative in the face of bad news, a bit like the search for the details of our mythical bank accounts and properties from across the world. Wish we knew where all these millions were," he said.

He even informed his father about how "three months after the wide-scale protests in Hong Kong, the Chinese government dropped its plans to extradite persons accused of charges to mainland China."

Karti talked about Rafael Nadal winning the US Open after defeating Daniil Medvedev.

In the end, Karti wrote, "But I have faith that you too will come out guns blazing against this elaborately staged political drama and for now, we all await that hard-fought glory of truth."

P Chidambaram is facing probe in the INX media case by both the ED and the CBI.