The Presiding Officers of the various state assemblies and legislative councils failed to reach a consensus on anti-law defection law. 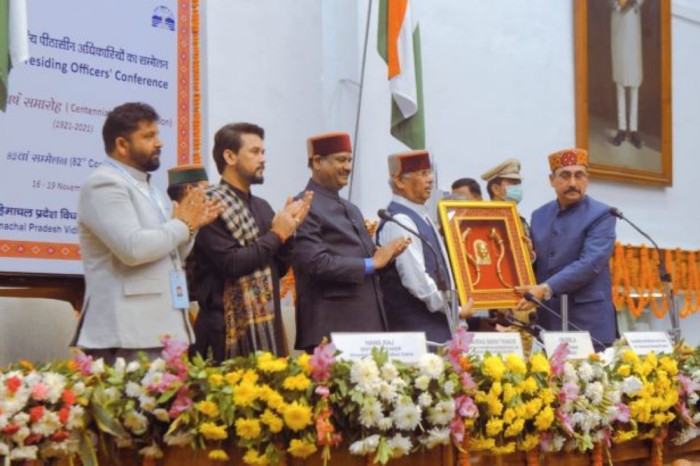 The 82nd Conference of the Presiding officers of the state assemblies, and legislative councils ended in Shimla while failing to reach a consensus on anti-defection law on Thursday.

During the conference, it was broadly agreed to take steps to effectively curb increasing tendency of indiscipline, disruption, uproar in the House for qualitative change in the legislative functions of the assemblies in the states.

“Anti-defection law was in the agenda for the conference in the light of C P Joshi committee report ,which was also laid on the table .Discussions were held but no consensus reached .We will take-up this once again later sometime”, said Lok Sabha Speaker Om Birla.

The committee under Rajasthan Assembly Speaker C P Joshi was set-up by Birla in 2019, after a lot of deliberations, following resignation of 17 legislators of Congress and Janata Dal (S),who later had joined BJP.

Himachal’s Leader of Opposition Mukesh Agnihotri had also raised the issue during the inaugural session.

Birla said detailed deliberations were held on diminishing standards of debates, discipline and decency in the Parliament and in the state legislatures.

“The need was felt to make the legislative Assemblies more public centric to keep pace with the changes in the public needs , new technological ,liberation and other innovations happening in the country,” he said.

The Lok Sabha will frame a model draft on new changes proposed for making the functioning of the state legislatures more transparent and enforce discipline in the House, he said.

The draft will be circulated to the states,where the Speakers will hold discussions with political parties and take-up reforms as per local needs, he said.

Every state legislature, he said must introduce “zero hour” to give maximum opportunities to members to raise issues of public importance .

“Even an effort will be made to evolve a consensus at the national level to see that no disruption is caused to the House during the President or Governor’s address in the Houses ,and also the question hour could be run without disruptions,” he added.

The first conference of the Presiding officers was held in Shimla in 1921 and holding of the 82nd session in 2021 was a conscious decision to measure the process and contribution made by the state legislatures, and presiding officers in the past 100 years,he said.

He announced that Himachal Pradesh will be the first state in the country which has given its approval to recommendation of the Presiding officers for financial autonomy.

The government has approved the proposal.

Birla said the conference has decided to introduce the ‘One Nation One Legislative Platform’ concept ,which Prime Minister Narendra Modi has suggested on Wednesday during his address .

“All legislatures can make available their current and old debates and other resources at one place with collective efforts” announced setting –out a deadline of 2022,” he said.

Union Minister for information and Broadcasting Anurag Thakur,who spoke at a valedictory session ,said legislature assemblies and Parliament are institutions where the members duty is to legislature ,deliberate and debate not disrupt .

" You are free to tear -off papers in the streets but parliamentary and legislative forums are for debates and discussions .Even the role of the members is well defined but unfortunately few think tearing off papers ,creating ruckus or dancing on tables could do a better job,” he said.

He also highlighted the importance of Shimla town,which has witnessed many historic events including election of legends like Vithbhai Patel as first elected Presiding officer here at the "Council Chamber "—now state assembly, and also the holding of the first conference of the presiding officers in September 1921.