Chief Labour Commissioner had on April 8 directed its regional office to count within three days every labourer who was stranded after the lockdown imposed to combat Coronavirus. 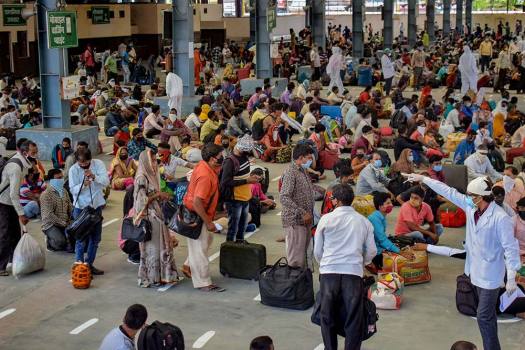 The office of Chief Labour Commissioner, which had ordered a count of stranded migrant labourers in the country last month, does not have any data on it, the Union Labour Ministry told an RTI activist.

Applicant Venkatesh Nayak from Commonwealth Human Rights Initiative said the data remains unavailable even after the CLC, on April 8, directed its regional office to count within three days every labourer who was stranded after the lockdown imposed to combat coronavirus.

The circular issued by the Chief Labour Commissioner (CLC) said a huge number of migrant workers were impacted due to the lockdown.

A number of them are stranded and placed in shelters, relief camps arranged by state governments, employers at work place, and also at some clusters, it said.

"In view of above, comprehensive data in respect of the migrant workers are urgently required within three days," it said, giving three categories in which data should be collected--relief camps, employers and where labourers are clustered.

Also Read: The Hunger Of Migrant Workers Is Our National Shame

Nayak said he filed a Right to Information (RTI) application after waiting for almost two weeks for the official announcement of the results of the enumeration exercise.

In his application, he sought to know the state-wise names of districts from which data about the stranded migrant workers has been received.

"Given the widespread debate about the plight of migrant workers and the yeomen service provided by several government agencies, hundreds of NGOs and thousands concerned citizens to ensure that many of them were served food, water and other essentials, this information I believed has an enormous public interest dimension attached to it," Nayak said.

The online system of filing RTI applications directs the queries to  the CPIO concerned. If the department concerned receiving it does not have the information, it is transferred to the CPIO which is closely linked to the subject.

The application was received by the state section of the CLC. The RTI mandates in case the CPIO does not have information he will transfer it to the department which is likely to have the sought information or seek help of the officer who is supposed to have the information.

"As per the stat section is concerned, no such details are available based on requisite information," the CPIO who was assigned the application said.

Under the RTI Act, the CPIO has to provide information, transfer it to the correct officer or reject it citing exemption provisions of the RTI Act, Nayak said.

"The CLC's CPIO resorted to none of these actions. He did not even send a signed reply. Most other CPIOs upload a scanned copy of their reply on the RTI Online Facility in addition to emailing it to the RTI applicant under their name and signature," he said.

He claimed CLC CPIO's "cryptic one-liner reply" raises serious doubts about availability of data about migrant workers despite the launching of the enumeration exercise.

"Does the CLC or any other public authority in government have accurate data about the number of stranded migrant workers or is there any reason why it does not want to make such information public? I have already filed a complaint before the Central Information Commission in this case requesting an early hearing," he said.