Amid power tussle, Shiv Sena continues to take potshots at its ally BJP. 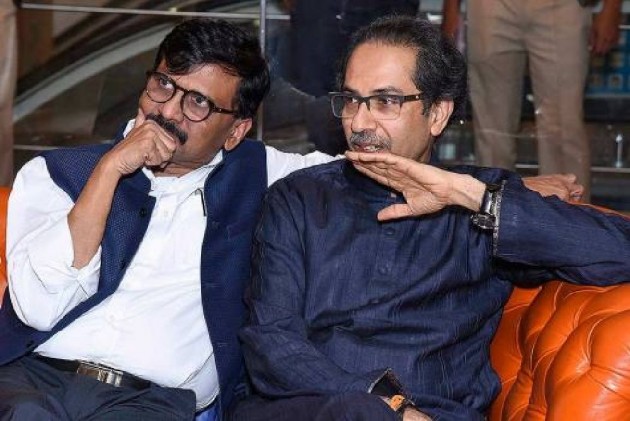 The ongoing tussle between Shiv Sena and the BJP over government formation in Maharashtra sees no end even as Shiv Sena continues to take potshots at its ally.

Shiv Sena leader Sanjay Raut on Tuesday again launched a series of attacks on the BJP, saying there is no 'Dushyant' in the state and that Shiv Sena practices politics of "dharma and Satya".

The jibe was in reference to BJP's deal with Jannayak Janata Party leader Dushyant Chautala who partnered with Manohar Lal Khattar to form the government, despite the bitterness they share before the polls.

'BJP Can Set Fire To Mantralaya, But...': Shiv Sena Refuses To Budge On Power Sharing Formula

Referring to Dushyant's father, Shiv Sena alleged that Ajay Chautala was granted furlough only after the newly-elected Haryana Deputy CM signed a deal with the BJP to form the government.

"We do not have any Dushyant here whose father is inside the jail. Here it's us who do politics of dharma and satya (righteousness and truth). Maharashtra has a very complicated politics," ANI news agency quoted Raut as saying.'

"If someone wants to keep us away from power, then it is an honour for us. A decision will be taken soon. We are currently observing that to what lows people can resort to. As decided before the Lok Sabha elections, our only demand is that things should work according to what has been decided earlier," he added.

Raut's statement came amid an ongoing tussle over government formation in the state between the BJP and Shiv Sena.

The BJP and Shiv Sena together won the Maharashtra state elections with a majority, but the seat share of both the parties registered a dip. The BJP won 105 seats in the 288-member Maharashtra assembly and the Shiv Sena won 56. The results have, contrary to the expectations of the BJP, left the Shiv Sena in a position where it can call the shots.

Soon after the results were declared, Shiv Sena chief Uddhav Thackeray told the media that the question of next chief minister was an important one and needed to be discussed between the two alliance partners. He also said that it was the time for Shiv Sena to grow as a party, hinting at the 50:50 arrangement, which the BJP has been denying.

"We contested less number of seats for the Lok Sabha and assembly elections. I cannot accommodate the BJP every time. We also need to grow our party. I want to remind the BJP of the formula which was worked out in the presence of (BJP president) Amit Shah," Thackeray had said.

Raut also said the BJP will have to honour its word.

"Uddhav Thackeray ji has said that we have other options too but we don't want to do the sin of accepting that alternative. Shiv Sena has always done politics of truth, we are not hungry for power," said Raut.

"We cannot murder democracy or teach moral lessons to everyone. Shiv Sena has always kept itself away from such kind of politics," he added.

Ever since the results have been declared, Shiv Sena has launched several attacks on the BJP, including the economic condition the country is facing.

The Shiv Sena is not budging from its demand of a rotational chief minister. During a party meeting on Saturday, Sena demanded from the BJP a written assurance on this arrangement.

Shiv Sena MLA’s are demanding Aaditya Thackeray, who won his debut election from Worli, to be made Chief Minister for two-and-a-half years.

"Uddhav Thackeray will decide on the chief ministerial candidate. But we want, and the people of Maharashtra also want Aaditya Thackeray for the job," Raut was quoted as saying.

On Saturday, Sena, in its mouthpiece ‘Saamna’ attacked the BJP, saying Maharashtra “does not accept power of arrogance”. On Monday, it took a dig at the BJP-led central government over the economic slowdown. Using a popular Bollywood dialogue “Itna Sanata Kyun hai Bhai”, Sena questioned the BJP’s silence over the current economic condition.

As of now the standoff between the two parties persists as none of the parties can stake claim to form the government, for none of the two has a majority on its own.