'No Means, No !' After Landslides, Kinnaur Natives On Warpath Against Hydel Projects

'No means, No' is a powerful slogan coined by the locals in Kinnaur supported by some social and environmental groups to stop sanctioning of any new hydel projects, almost on the lines of Uttarakhand’s famous “Chipko anadolan” – a mass movement to save the forests there . 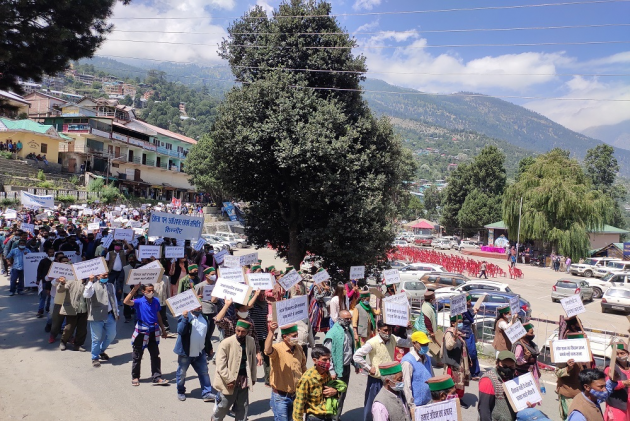 Massive environmental destruction, loss of rare biodiversity including an endangered forest species of Chilgoza and spate of human tragedies recently due to huge landslides, the tribal population in Himachal Pradesh's Kinnaur is up in their arms to oppose new hydel projects ,much against the total carrying capacity of the fragile mountain ecology.

“No means, No “ is a powerful slogan coined by the locals supported by some social and environmental groups to stop sanctioning of any new hydel projects, almost on the lines of Uttarakhand’s famous “Chipko anadolan” – a mass movement to save the forests there .

Says Sunder Negi , a youth with B.Tech degree and engaged in farming, “Enough is enough. We started a movement against hydel projects three years back and submitted memorandum to the state government. There was no response or full stop to the works on the hydel projects and continue even today after Kinnaur has seen loss of so many lives in the landslides –two of these making national headlines “.

In response to the call given by the organisations leading the movement, thousands of tribals demonstrated at Reckong Peo –the headquarter of Kinnaur district and held a rally asking the natives to join hand to save their existence in the backdrop of natural disasters and landslides happening after every brief interval.

One of the forceful demands raised by the protesters on Wednesday was scrapping of all the proposed hydroelectric projects in Sutlej river, falling in Kinnaur district. The immediate concern was about 804 MW Jangi Topan project, which had not only put the local biodiversity in threat but also challenges the existence and survival of Chilgoza forests –one of the most endangered species of the organic dry fruit.

Roshan Lal Negi, an environmentalist, alleged at the rally the government and scientists have been attributing the landslides and mountain slips as natural disasters to give a clean chit to the hydropower projects. But, the buck stops somewhere else.

The area of Jangi Thopan Project is a big zone of ‘Khadoora’ landslide and such a situation is a result of willful interference with the nature and over exploitation of the resources. Massive work on the projects and land use changes are causing man-made disasters.

“Any more of tampering will prove to be fatal for the area and its residents” said Shanta Kumar Negi of Hangrang Sangharsh Samiti.

Capitalist profiteering in the blind race of development has not only destroyed the environment but has also increased inequalities within the country – in this model companies dominate and political parties act as middlemen for them. “Our resources are getting privatized on a large scale and this is leading to the development of a handful of companies and the general public losing their livelihood”, said Manshi Ashar of Himdhara environmental group.

Questioning the model of disastrous development in the entire Himalayan region, Guman Singh of Himalaya Policy Campaign said that if the government sitting in power today does not ban the dams in Kinnaur, then it will be considered a murderer in history.

They also expressed disappointment against the state government not implementing the Forest Rights Act 2006 and granting  ‘Nautor’ ( land allotments of the tribals) and not considering the genuine demands of the locals pertaining to the land, water and forests.

Priya, a resident of Jangi area and a member of the Zilla Parishad, said that this Kinnaur movement would rise above party lines and fight for the existence of Kinnaur.