He 'has married three women of three different faiths', the BJP leader said 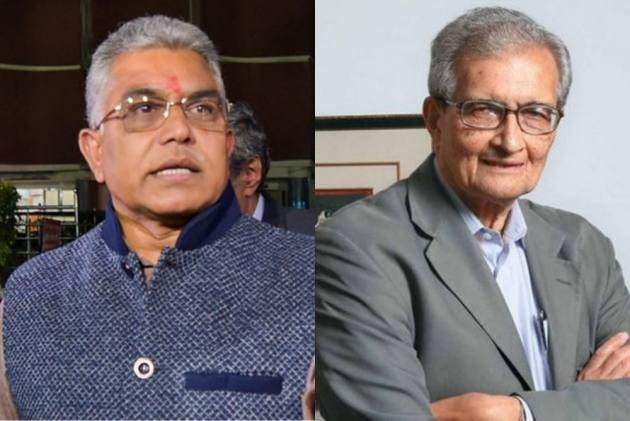 Amid the recent Visva-Bharati University tiff, BJP state president Dilip Ghosh slammed Nobel laureate Amartya Sen on his stance about the state, according to The Statesman.

“I don’t want to attack personally to a person who has married three women of three different faiths. He has no moral right to say anything,” Ghosh said on Bengali news channel ABP Ananda.

“He has fled the country. He is never seen with the people of this country. He was nowhere to be found during a crisis like Amphan or pandemic. We are not here to take moral lesson from such a person,” the Medinipur MP added.

The debate gathered steam when Visva-Bharati University VC alleged that Professor Sen, who is an alumni of the institution, had identified himself as "Nobel laureate Amartya Sen”. This claim has, however, been refuted by the Bharat Ratna.

It escalated over the land allotted to the economist. Responding to the controversy following media reports that Visva Bharati has named him among those occupying additional illegal plot, Sen has said that the entire land occupied by him is registered in records and is entirely on long term lease.

West Bengal Chief Minister Mamata Banerjee, who is standing by Sen, had earlier expressed anguish at recent developments alluding to the world-renowned economist's familial properties in Shantiniketan. Asking Sen to count her as a sister and friend in his war against "intolerance and totalitarianism," Banerjee wrote that some "nouveau invaders" in Visva Bharati have started raising surprising and completely baseless allegations about his familial properties in Santiniketan.

Dilip Ghosh had previously said being a Nobel winner and economist of international repute, Sen should see to it that he is not used by some forces to score their political interests.