The GoC of the Chinar Corps said if anyone picks up arms, they will face consequences and will either be neutralised or apprehended or will have to surrender. 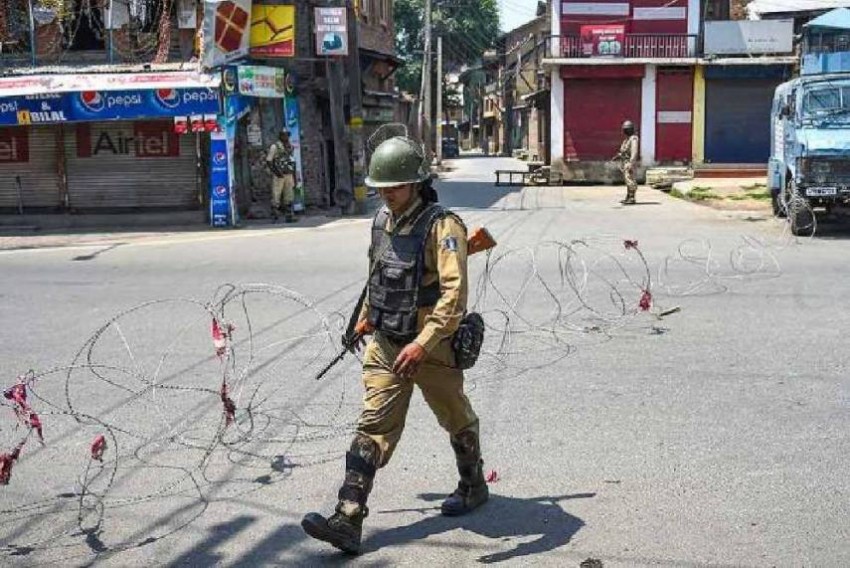 In the wake of the developments in Afghanistan, the army said that there was no need to worry about the Taliban in Jammu and Kashmir.

Dismissing the possibility of a spillover of Taliban militants into J&K, a top army official said that the people will be kept safe.

"This question has been asked to me a number of times on events which are unrelated. Right? So, I will again answer your question: why are you worried? You are safe and you will be kept safe. There is enough effort," General Officer Commanding (GoC) of the Army's Srinagar-based 15 Corps or Chinar Corps, Lt Gen D P Pandey, told reporters here.

The GoC said if anyone picks up arms, they will face consequences and will either be neutralised or apprehended, or will have to surrender.

"I am not looking at questions on Taliban or foreign terrorists or local terrorists. For us, it has got nothing to do with the quality and quantity. If there is a gentleman who picks up a weapon, he will be neutralised either way -- by getting killed or by getting apprehended and if he comes and offers (to) surrender, we will take surrender," he said.

"Their strategy is to not carry out any terrorist attack, but motivate the local youth to action and give them arms so that they are killed in encounters. It benefits them in a way that when a young boy from our country, our Kashmir, is killed, his family becomes angry with us. This is their strategy and they do not carry out operations and work from behind," he added.

The GoC, however, said there is a change in the mindset of the people in Kashmir as they have "realised that they have been taken up the wrong path by the people within their own community".

"This is the fight against anti-national, anti-social elements which has to be taken up by the people themselves. We need to ensure that the children come out freely, educate themselves and become responsible citizens of the country.

"They take respect in society, they fulfil the dreams of their parents. No father or mother wants their child to pelt stones on the streets, but there are vicious elements which motivate them through various means and take them out on to the streets," he said.

Lt Gen Pandey said the current security scenario "reflects clearly that the youth has stopped coming out on the street, that they have understood this game".

"Therefore, we will continue to launch such ventures to ensure there are better opportunities for the youth to compete with the best pan-country and go out all over the country, the world and become responsible, mature human beings,” he added.

He said the security forces have been reaching out to the families of the youth who have joined militancy.

"We have to ensure that they (families) reach out to their young ones who have been misled and they should be allowed to surrender by motivating them to be a responsible citizen of the country. There cannot be a better opportunity as of today to ensure that they can fall back to civil society,' he said.

The senior army officer said those people within Kashmir who are “misleading” the youth to pick up arms must be exposed.

"We must expose the people who are within Kashmir who are ensuring that while their children are studying in good schools, colleges, have good jobs or businesses, but the youth which is misled, which is not from such an affluent background, not so well-educated, picks a weapon and dies.

"The local terrorist family members need to go and ask those parents that why is your son not picking up weapon but you are ensuring that my child picks up weapon. Why is it that my kid is taken to a wrong path? Unless this realisation comes from within the society, this nickel will always remain," he said.

Earlier, the GOC Chinar Corps felicitated students of the first and the second batch of the Army's Kashmir Super 30 (Medical) course who are now successfully undergoing the MBBS and other courses after clearing the NEET.

Since the initiative was launched in June 2018, 68 students have successfully undergone the programme over the last two batches with hundred percent results. The third batch of 35 students has appeared in NEET examination in September.

The GoC Chinar Corps complimented the efforts and dedication of the students and support of their parents. He announced that the fourth batch will commence on 25 September.

In line with Chinar Corps' efforts to empower women, 20 girl students are being considered for the fourth batch. The selected girls will join the fourth batch after a month. So, the batch will host 50 students -- 30 boys and 20 girls. Necessary infrastructure development will also be undertaken to support the project, he said.