'No One Should Communalise Criminal Incidents': Naqvi Slams Letter To PM Modi Over Lynchings

Union Minority Affairs Minister Naqvi said, 'No one should communalise criminal incidents. Dalits and minorities are safe in this country.' 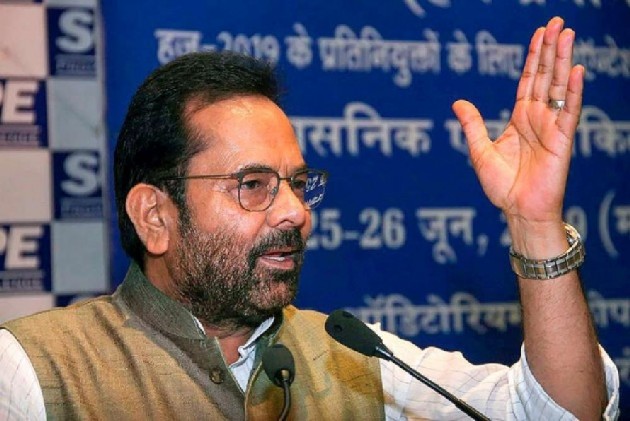 Union minister Mukhtar Abbas Naqvi asserted on Wednesday that Dalits and minorities are safe in the country after a group of eminent citizens wrote to the prime minister expressing concern over lynching incidents, and said those "yet to recover from" the defeat in the Lok Sabha polls are trying to communalise "criminal incidents".

The letter, signed by 49 celebrities from various fields, including film-makers Shyam Benegal and Aparna Sen, stated, "The lynching of Muslims, Dalits and other minorities must be stopped immediately."

Talking to PTI over phone, Union Minority Affairs Minister Naqvi said, "No one should communalise criminal incidents. Dalits and minorities are safe in this country. Those who are yet to recover from the defeat of 2019 Lok Sabha polls are trying to do it."

"We have seen the same thing after 2014 (elections) in the name of 'award wapsi', this is just part two of that," the minister said, referring to the protest by writers against the government's alleged silence on violence and rising intolerance.

The July 23 letter to Prime Minister Narendra Modi also stressed that there is "no democracy without dissent".

The signatories said they regretted that "Jai Shri Ram" has been reduced to a "provocative war cry that leads to law and order problems, and many lynchings take place in its name".

It is shocking, they said, that so much violence should be perpetrated in the name of religion.