No Plan To Update NRC In Bengal But We Will Implement CAA: BJP Leader Kailash Vijayvargiya

‘We are only looking forward to implementing the CAA after the (Bengal Assembly) elections...It is an important issue for us, as we wish to grant citizenship to the persecuted refugees,’ Kailash Vijayvargiya said 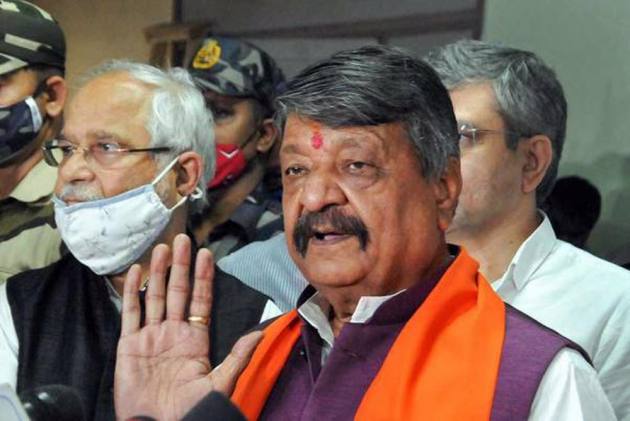 BJP national general secretary Kailash Vijayvargiya on Sunday said that the saffron party does not have any plan to update the National Register of Citizens (NRC) in West Bengal. This comes in counter to the Opposition's claims that if voted to power in Bengal, BJP will update the NRC, thereby "taking away the citizenship rights of people".

He, however, stated that the saffron party intends to implement the Citizenship Amendment Act (CAA) and provide citizenship rights to refugees who moved in to India after facing religious persecution in neighbouring countries.

"We are only looking forward to implementing the CAA after the elections, as promised in the manifesto. It is an important issue for us, as we strive to grant citizenship to the persecuted refugees. We do not have any plan of conducting the NRC exercise, even if we win the elections," he said.

According to state BJP sources, the new citizenship law will benefit more than 1.5 crore people in India, including over 72 lakh in West Bengal.

Accusing the TMC of "running a disinformation campaign” against the saffron camp, the 64-year-old leader wondered why the ruling party in the state is opposing the CAA, which could
be of benefit to many.

Bengal has a sizeable population of Matuas, who have been migrating to the state since the 1950s, primarily due to religious persecution. The community, with its three million members, influences at least four Lok Sabha seats and 30-40 assembly seats in Nadia, North and South-24 Parganas.

Many political analysts claim that the TMC hopes to politically exploit the confusion over CAA implementation to curry favour with the Matua community, which had voted hands down in favour of the saffron camp in the 2019 Lok Sabha polls.

Training his guns on Bengal Chief Minister Mamata Banerjee over her assertion that the "Election Commission was working at the behest of the BJP", Vijayvargiya, who is also the BJP's Bengal minder, said it was an irony that the TMC boss pointed no finger at the poll panel when her party registered two successive electoral victories.

Contending that Banerjee's "foolish claims" will yield no result, he said the TMC, sensing defeat, is levelling absurd allegations against the saffron party.

"Mamata Banerjee never felt that the EC was acting partially when she won the polls. The irony is that when you were winning the elections, everything seems fine. Once you
start sensing defeat, you blame the EC and the electronic voting machines," he said.

Exuding confidence that the BJP will sweep the assembly elections, with more than 200 seats in its kitty, Vijayvargiya also downplayed insinuations that the party could
be at a disadvantage for not having projected a chief ministerial face in Bengal, and said "several leaders are capable of taking the reins of the state" and a decision would be taken only after the polls.

"We are fighting the elections under Prime Minister Narendra Modi's leadership. We have never projected a CM face in poll-bound states. For us, ideology is important. Once voted to power, the legislative party in consultation with the top leaders will decide on the CM candidate," he said.

In an interview with PTI, the BJP's Bengal minder further claimed that the people of the state are waiting to witness "ashol poriborton" (real change), as they have long endured infiltration woes, corrupt practices and the politics of appeasement.

The call for "poriborton" was first given by the TMC during the 2011 assembly polls, as it sought to end the 34- year Left rule in the state.

Slamming the Mamata Banerjee camp over its "outsider versus insider" debate, the BJP's chief strategist in Bengal said that the ruling party in the state has nothing better to talk about, given its dismal performance in the last 10 years.

The TMC has branded the BJP as a "party of outsiders" as its top leaders hail from other states.

"The TMC wants to make an emotional appeal with its 'Bengal daughter' campaign. But I don't think Bengal would get swayed away by this. This is 2021, and such issues don't have much of an impact. As the party has no achievement in its bag, it clings to this 'outsider-insider' debate," he said.

Noting that people are fed up with the TMC's "syndicate culture, appeasement politics and politicisation and criminalisation of administration", Vijayvargiya said "corruption has percolated to the grass-roots level, and that has angered the people of the state".

Insisting that the BJP is keen on securing India's eastern borders, which have turned into a "transit point for terror elements", he said infiltration is not just threatening national security but also taking a toll on the country's economy, as locals now have to compete with the illegal immigrants for jobs.

Dismissing allegations that "communal polarisation has reared its ugly head in Bengal, with the growth of the BJP in the state", the senior saffron camp leader said the TMC's appeasement politics was to blame for the rise in identity politics, and his party, once voted to power, would put an end to this practice.

Asked whether the rift between old-timers and newcomers over ticket distribution has been reined in, he said everyone in the party will have to abide by the rules and regulations laid down by the top brass.

"During the last assembly polls, we had difficulty finding suitable candidates for the 294 seats. This time, however, there were as many as 5,000 aspirants. Thankfully, everything is under control.

"We have spoken to all workers, and they are back working for the party. We are a disciplined party, but we also practise democracy and everyone has the right to express their views," he said.