Home  »  Website  »  National  »  No Tokens, Only Smart Cards, No Entry Without Masks: Delhi Metro To Resume With Restrictions

No Tokens, Only Smart Cards, No Entry Without Masks: Delhi Metro To Resume With Restrictions

Inside metro premises and train coaches, wearing of masks will be mandatory and social distancing norms will be followed as per the government guidelines, and people not wearing masks will not be allowed to enter metro premises. 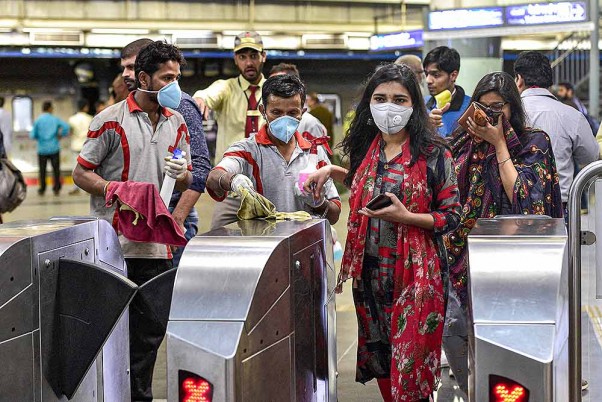 The Delhi Metro will limit the number of people in lifts, ensure longer halting time for trains at stations to allow commuters to board and alight with social distancing norms, and make smart cards mandatory.

These are among the slew of measures the Delhi Metro will take to ensure safer travel for its passengers, when services resume on September 7.

The Delhi Metro has been closed since March 22 in the wake of the COVID-19 pandemic.

"We will ensure that social distancing is maintained in the metros. Thermal screening of passengers will be done at the entry. No tokens will be issued, smart cards and other digital methods of payment will be used," said Kailash Gahlot, Delhi Transport Minister to ANI news agency.

"As per the latest guidelines issued by the Ministry of Home Affairs under Unlock 4, the Delhi Metro will be resuming its services for public from September 7 onwards in a calibrated manner," the DMRC said in a statement on Saturday.

Further details on the metro functioning and its usage by the general public will be shared once the detailed standard operating procedure (SOP) is issued by the Ministry of Housing and Urban Affairs in the next few days, officials said.

"We are still awaiting nod for resumption of services. However, all safety protocols have been worked out and some more being worked out so as to ensure maximum safety for passengers whenever services are ordered to be resumed," a source said.

Inside metro premises and train coaches, wearing of masks will be mandatory and social distancing norms will be followed as per the government guidelines, and people not wearing masks will not be allowed to enter metro premises, officials said.

"Trains will halt for longer duration than on regular days to allow commuters to board coaches and alight from it while maintaining physical distance. Also, the number of persons permissible to board a lift will be reduced in view of social distancing, and exact number is still being worked out," the source said.

One train coach has a capacity to accommodate about 50 passengers on seats and a total of nearly 300 riders in the entire compartment, including standing commuters. With social distancing norms, this number will reduce drastically.

From new smart cards with auto top-up facility to stickers on social distancing norms pasted on seats and platform floors, the Delhi Metro is all set to handle commuters in adherence to COVID-19 safety guidelines, whenever the services are ordered to be resumed, officials had earlier said.

Chief Minister Arvind Kejriwal had recently said that metro train services in Delhi should be resumed on a trial basis as the COVID-19 situation was improving in the city, and hoped the Centre would soon take a decision on it.

However, the number of fresh cases and active cases have risen in the last several days.

Experts have attributed the rise in cases in the last week or so to reopening of the economy and many people not following the safety protocols and social distancing norms in public.

Also, before Delhi Metro services were closed in March, a Rs 200 fine was mandated for spitting inside metro properties. However, it is likely be hiked multiple times, sources had earlier indicated.

The economy has slowly opened up in a phase-wise manner in the unlock period since June.

According to the sources, the Delhi Metro has suffered a loss of nearly Rs 1,300 crore since the closure of services in late March due to the COVID-19 situation.

On regular days, the average daily ridership of the Delhi Metro Rail Corporation (DMRC) is over 26 lakh.

Awaiting a nod to resume operations, the DMRC in these months, meanwhile, had been training its staff on compliance of COVID-19 safety norms and also on ways to make travel safer for commuters.

Thermal scanners will test temperature of commuters while entering and hand sanitiser will kept for them too.

Delhi Metro authorities have been working on protocols to ensure social distancing norms are in place, which will come handy when commuters return next month, with services ordered to resume in a phased manner.

Seeking to promote greater e-transaction for commuters to avoid physical contact as such, the Delhi Metro on August 19 had announced a new facility that will enable riders to get their smart cards auto-topped up with money at AFC gates.

The old smart card issued by the DMRC can also be upgraded to avail this facility, they said.

"This feature comes handy at these times wherein, commuters are going to follow a new travel protocol, whenever metro services resume, which calls for social distancing and contactless services due to the ongoing COVID-19 pandemic," a senior official said.

Among other measures, red lines have been drawn at regular intervals next to AFC gates and security checking gates, just before commuters enter near the platform areas.

On platform floors, large stickers bearing 'Ensure Social Distancing' message have been pasted at regular intervals, with a while circle bordered by an outer red circle, to alert commuters.

The DMRC authorities, however, remain tight-lipped on whether keeping Aarogya Setu app will be mandatory for travelling in metro when the services are resumed next month.

‘We Are Not Anyone's Puppets’: Farooq Abdullah's Retort To Pakistan