The Shimla Municipal Corporation is under attack from the citizens and elected councillors questioning Mayor Satya Koundal about the drinking water crisis. 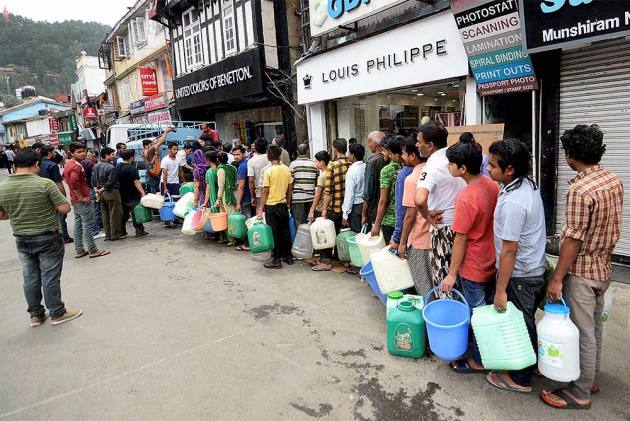 "Water, water everywhere, nor any drop to drink".

The old lines from an 18th-century poem seem to have come true in Shimla – the capital city of Himachal Pradesh, which is once again facing a water crisis amid heavy flooding and waterlogging across the state.

Heavy rainfall has caused flash floods in many of the rivers and streams flowing through the state, endangering the lives of hundreds of tourists and locals.

However, the high turbidity and silt level in the water has turned into a problem for Shimla residents who are facing a drinking water crisis for almost 15 days.

The Shimla Municipal Corporation is under attack from the citizens and elected councillors questioning Mayor Satya Koundal about the drinking water crisis. There are areas that have not received a drop of water for the past five to five days, alleges Inderjit Singh, a Congress councillor in the city.

Rajesh Kashyap, additional General Manager at Shimla Jal Pradhan Nigam (SJPN)—an agency responsible for the water supply in the town, admits that there have been problems in the river sources.

“Every monsoon brings us this problem of higher levels of silt and turbidity. This adversely affects the pumping of the water and also its filtration from natural sources and tributaries. We have proposed rationing for a few days to ensure an equitable distribution of the water in all the areas of the town, particularly at the tail points”.

During the summers the SJPN was supplying almost 42 to 44 MLD of water through the town and had very less demand as compared to previous years. This was basically Covid lockdown time and no tourists or visitors were coming to Shimla. The hotels and restaurants had also cut down their consumption.

Currently, the availability of water has come down by 10 to 12 MLD, hitting the lowest 32 MLD on some days. There is enough water flowing in the sources but can’t be pumped due to the high percentage of silt content making the water unfit for consumption.

Shimla Mayor Satya Koundal admits that the problem has put the citizens in crisis and efforts are being made to ensure that residents get water at least on alternate days.

Shimla is no stranger to the water crisis. In 2018, the British era town hit the headlines for running without water for eight days, following which the High Court intervened, asking the state to bring the crisis under control.

This was the first-of-its-kind crisis for the approximately two lakh residents of Shimla,  post-independence. However, the state government made a big turnaround in 2019 improving the supply – a success story of its own kind.

The current shortage is a fresh reminder of the water crisis in the hill town today.