Naqvi's comment comes close on the heels of several instances, reported from across the country, of people from the minority community forced to chant "Jai Shri Ram". 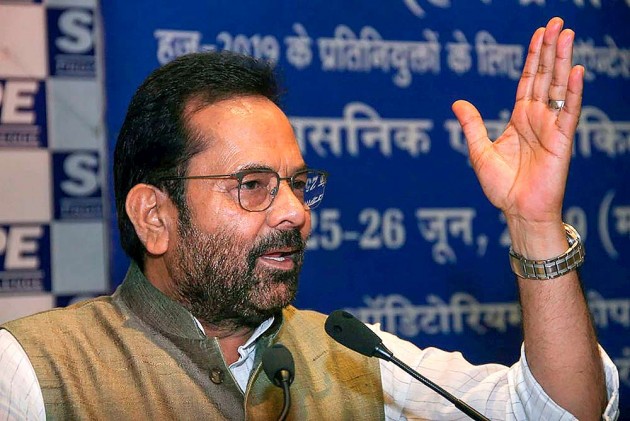 Nobody should be forced to chant "Jai Shri Ram" but you can't refuse to sing Vande Mataram, Minister of Minority Affairs Mukhtar Abbas Naqvi has said, emphasising there shouldn't be rigidity on either side.

In an interview to NDTV, Naqvi said there were enough laws in India to deal with incidents of lynching.

Naqvi's comment comes close on the heels of several instances, reported from across the country, of people from the minority community forced to chant "Jai Shri Ram".

"Tell us one lynching incident in which the accused has not been caught. In Rajasthan, the accused did not get bail for six months. In Uttar Pradesh, the accused was found in four hours. Whatever be the incident, there has been instant action," he said.

Naqvi also said that the country is "secular not because of its minorities, but it is in the DNA of the majority community."

Twenty-four-year-old Tabrez Ansari was last month beaten for hours by an angry mob and coerced into chanting "Jai Shri Ram", before being handed over to the police in Jharkhand. Days later, he died when taken to the hospital.