The Noida International Airport (NIA) being constructed near the town of Jewar in Gautam Buddh Nagar in the NCR region in Uttar Pradesh will be India’s largest airport after its completion. 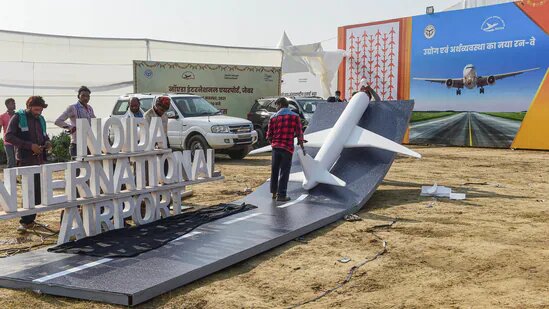 Uttar Pradesh has achieved yet another record in its incessant march towards achieving world-class connectivity and infrastructure witthin a short period of less than five years. With the foundation-laying ceremony for the Noida International Airport on Thursday, the state is now on its way to having five international airports – the highest for any state in India so far.

Uttar Pradesh achieving this unique distinction in the field of providing unmatched air connectivity in the country is in line with the Government’s commitment to ensure uninterrupted multi-modal connectivity on land, railways, water and air. The ambitious Prime Minister’s Gati Shakti National Master Plan has infused a sense of urgency into the plans for infrastructure development in the state.

The Noida International Airport (NIA) being constructed near the town of Jewar in Gautam Buddh Nagar in the NCR region in Uttar Pradesh will be India’s largest airport after its completion. Its location is about 72 km from the existing IGI airport in New Delhi, 40 km from Noida and about 40 km from the multi-modal logistics hub at Dadri. It will have excellent multimodal connectivity as it is close to the existing Yamuna Expressway (Greater Noida to Agra), close to Eastern Peripheral Expressway and it will have link with Delhi-Mumbai Expressway at Ballabhgarh, Khurja-Jewar NH 91, link to dedicated freight corridor, Metro Extension from Noida to NIA and link with the proposed High Speed Rail (Delhi-Varanasi) at airport terminal.

• The phase I of the airport will have a capacity to serve 12 million passengers a year and is scheduled to be completed in 36 months.

• In each phase, the airport will expand to serve 70 million passengers by the end of phase 4, subject to passenger growth and traffic

The Kushinagar airport inaugurated by the Prime Minister Narendra Modi on October 20 is located 47 km east of Gorakhpur. Kushinagar is an important place for Buddhists pilgrims from all over the world as it is believed that Gautam Buddha had attained Nirvana here more than 2500 years ago. It provides connectivity to many places of Buddhist pilgrimage such as Lumbini in the Rupandehi District of Nepal; Sarnath in Varanasi, Shravasti near Bahraich, and Bodhgaya, Rajgir and Vaishali in Bihar. The air connectivity of both eastern and western Uttar Pradesh will improve manifolds with the Kushinagar airport and proposed NIA.

It is noteworthy that the first passenger flight from the recently inaugurated Kushinagar International Airport will take off for New Delhi at 12:00 pm on Friday, reducing the 14-hour journey to less than two hours. SpiceJet will launch a flight between Kushinagar and Delhi. From next month, flights for two more cities will take off from the airport -for Kolkata from December 17 and for Mumbai from December 18.

The operationalisation of the airports is already bringing in investment, establishing industries, and creating employment opportunities in the eastern part of the state, ensuring its social and economic development.