Karnataka Assembly Speaker K R Ramesh on Friday denied allegations that he was trying to delay the vote on the confidence motion moved by Chief Minister H D Kumaraswamy to decide the fate of his government. 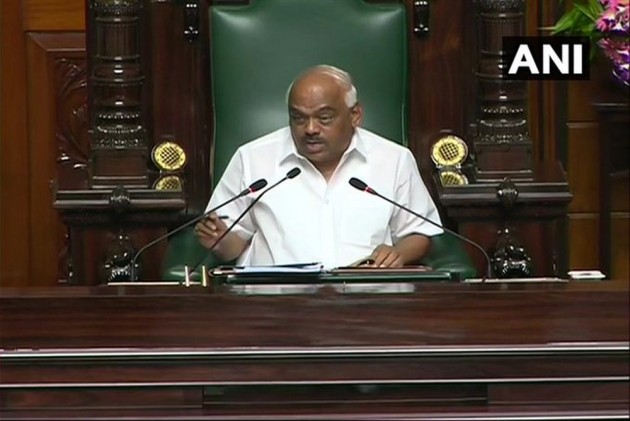 Karnataka Assembly Speaker K R Ramesh on Friday denied allegations that he was trying to delay the vote on the confidence motion moved by Chief Minister H D Kumaraswamy to decide the fate of his government.

The Speaker made his position clear as the Assembly proceedings began with Governor Vajubhai Vala having set 1.30 pm on Friday as the deadline to prove his majority.

"I don't have to be partisan," Kumar said, expressing anguish over suggestions that he was trying to delay the trust vote.

The speaker put forth his defence against the "indirect comments" hurled against him by saying, "Those who hurl slurs at my character, look back at what your life has been. Anyone who knows me knows I don't have lakhs of money stashed up like others. I have enough strength to take a non-partisan decision despite such slurs."

After making his remarks, the Speaker asked the chief minister to speak on the debate on the trust vote, saying, "I am clear... no scope for any other discussion (except the trust vote)."

Within hours after the confidence motion could not take place with the Speaker adjourning the day's proceedings in the assembly, the Governor had Thursday shot off the letter to the Chief Minister setting the deadline.

The Governor had observed that resignation of 15 MLAs of the ruling JD(S)-Congress and withdrawal of support by two independents "prima facie" indicated Kumaraswamy has lost the confidence of the House.

The Governor had also sent a missive earlier to the Speaker to conclude the trust vote proceedings by the end of the day.