Citing several examples of children's strong and natural immunity which were evident during the past two strong waves of Covid-19, top experts have launched the 'Happy 2022 For Kids’ campaign demanding immediate resumption of schools. 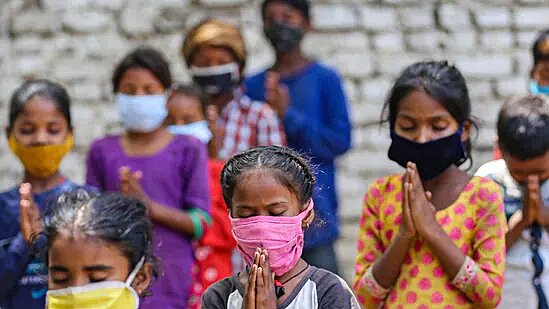 Citing examples of multiple states that kept schools closed for primary and secondary class children for almost two years, they said that and there has been no assessment of its adverse impact on their mental health.

Upset with the state of affairs, Bhaskaran Raman, a Professor of Computer Science in IIT Mumbai has started a campaign titled “Happy 2022, Happy For Kids Too,” which coincided with the start of the new year. A group of top scientists, doctors, epidemiologists, parents, teachers, educationists, and concerned citizens have singed it and agreed to be a part of the campaign.

They have based their arguments on the available evidence that during the two Covid-19 waves that India witnessed, children were the least affected with negligible hospitalisation and mortality data.

Their main call is immediate resumption of all schools and related activities for all kids. In addition to that, they have also demanded  a no disruptive social distancing for kids , no emergency-use jabs for kids and no asymptomatic Covid testing for kids.

“During the two waves that the country has faced, kids have shown an excellent natural immunity,” Dr Jayaprakash Muliyil, Chairman of the Scientific Advisory Committee of National Institute of Epidemiology, said. He is one of the signatories of the campaign.

Dr Amitav Banerjee (Head, Department of Community Medicine, Dr D.Y.Patil Medical College, Pune), who is also a signatory of the campaign says that several seroprevalence surveys show that up to 90 per cent of kids have already got infected and recovered without having any health issues.

“When the data proves that this virus is almost harmless for kids, why are we not reopening the schools? We are causing more harm to their mental being by closing the schools. This is a completely unscientific decision,” Dr Amitav Banerjee, Head, Department of Community Medicine, Dr D.Y.Patil Medical College, Pune, said.

Dr Banerjee also said that the current variant Omicron is causing mild symptoms to everyone, be it child and adult, and imposing lockdown and closing schools are knee jerk reactions without realising its grave consequence both heath of the children and economy of the country. Dr Arvind Singh Kushwaha, Department of Community Medicine, AIIMS, Nagpur, also supports the campaign.

“I will continue this campaign till January 26th, our Republic Day, where children's constitutional as well as birth-right to a normal childhood and education will be asserted. I and all others, who are now part of the campaign, invite one and all to join the Chain-for-Children’s-Cheer. I request people to visit happy22kids.org for more details,” Prof Raman said.

“The campaign has also put together scientific material, to educate and awaken people toward the cause. It also aims to put together interviews with children, parents and doctors and other relevant material to educate public on ongoing harms to children as part of Covid response,” he adds.

Dr Rai has even called the current immunisation programme for kids against Covid-19 an unscientific decision without considering any long term side effects.

Dr Rai had earlier told Outlook, “We haven’t seen severe Covid-19 among kids in India. Though the government hasn’t released data yet based on our experience of hospitalisation and death of patients in the first and second waves, we can say that kids are the least affected of Covid-19. In fact, the numbers are almost negligible. Even if a few deaths have been reported, these are those children who had the comorbid conditions.”

Professor Raman says that he wants to take this campaign to every parent and make them aware of the need for the school reopening.

“The slogan for the campaign is: “Join the Chain-for-Children's-Cheer”. The very first day of the campaign, saw over 150+ individuals across India join the chain to spread this message among friends/family/public and encourage others to join and grow the chain,” Prof Raman said.