Moily expressed the view that judges should not take upon themselves to punish a person who makes allegations against them. 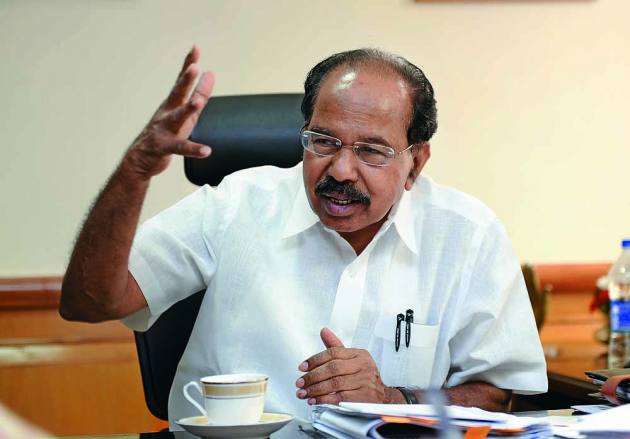 The Supreme Court on Monday punishing activist-lawyer Prashant Bhushan was unwarranted, former Union Law Minister M Veerapa Moily said and felt that the case against him could have been referred to the Bar Council of India.

The senior Congress leader said that Attorney General K K Venugopal and many jurists and lawyers had urged the Supreme Court not to punish him.

Moily expressed the view that judges should not take upon themselves to punish a person who makes allegations against them.

SC Fines Prashant Bhushan Re 1 In 2020 Contempt Case; 3-Month Jail If He Refuses

"It looks as if it was not warranted," he said on the Supreme Court imposing a token fine of one rupee against Bhushan as punishment in the contempt case against him.

Bhushan, who has been convicted for two tweets against the judiciary, has to deposit the fine with the Supreme Court registry by September 15, said a bench headed by
Justice Arun Mishra.

Failure to comply would entail a three-month jail term and debarment from law practice for three years, it said.

Politicians, judges or anybody should "bear this kind of criticism" and not take upon themselves to punish a person who makes allegations against them, said Moily, a
former Karnataka Chief Minister.

"Judiciary will have to lay down certain norms, methods to deal with such situations," Moily told PTI.

"At the most, they (SC) can make a reference to Bar Council of India.That is the right body to punish the lawyers."

The bench, also comprising Justices B R Gavai and Krishna Murari, said freedom of speech cannot be curtailed but rights of others need to be respected.

On August 14, the apex court held Bhushan guilty of criminal contempt for his two derogatory tweets against the judiciary and said they cannot be said to be a fair criticism
of the functioning of the judiciary made in public interest.