Now You Won’t Be Allowed To Sit On The Benches At Ridge And Mall Road In Shimla; Here’s Why

Senior citizens and ailing persons are, however, exempted to rest at benches selectively relocated near the Christ Church and Mall Road. 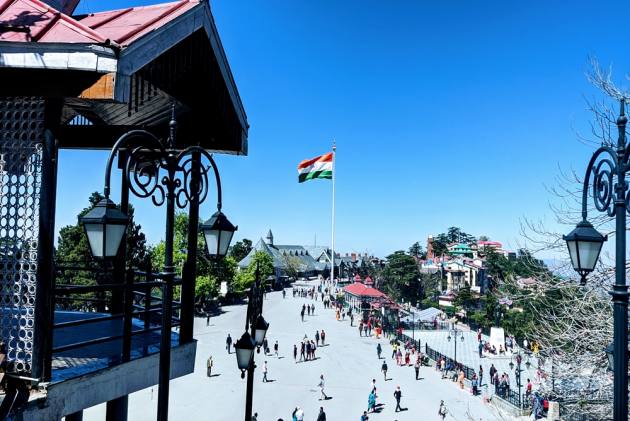 The district administration in Himachal Pradesh's Shimla has put restrictions on the number of people visiting the Ridge and Mall Road. The curbs were announced amid concerns around tourist influx at a time when experts have warned about a possible Covid-19 third wave.

Deputy Commissioner Shimla Aditya Negi has ordered local administration, police department, and Municipal Corporation to remove benches from the Ridge, where the tourists used to rest, assemble and also spend time to click pictures and roam around freely.

The move comes following concern expressed by the state High Court relating to overcrowding of the town and the inability of the police to enforce Covid appropriate behaviours. Most tourists are seen without masks and posing for photographs or crowing at eateries on the Mall Road and Ridge.

Senior citizens and ailing persons are, however, exempted to rest at benches selectively relocated near the Christ Church and Mall Road.

The Himachal Pradesh High Court last week had conveyed displeasure to the government over Covid violations by the tourists. It had also set up committees at the district level and directed the DCs to deploy additional police forces to keep an eye on the defaulters.

State Chief Minister Jai Ram Thakur, who returned from Delhi this afternoon ruled out imposing Covid restrictions in the state or any move to send the tourists back from the borders.

“Himachal Pradesh is largely dependent on tourism and this sector has suffered a big blow during the lockdown. Thousands of youths are earning likelihoods from the business and activities dependent on tourists’ arrivals. There are no plans to impose restrictions” he said yet adding “we are firm to enforce strict regulations to stop overcrowding of the places like Ridge, Mall Road or else.

Thakur said the Indian Council of Medical Research (ICMR) has already expressed concerns about the surging crowds in the hills and Prime Minister Narendra Modi has also asked the state to see that the regulatory mechanism for the crowd is enforced strictly.

“The people should not become the reason for the third wave of Covid," said the CM quoting PM Modi’s words to him.

Director-General of Police Sanjay Kundu also informed that instructions have been passed to all IGs /DIGs and SPs to make additional deployments of the police force to ensure that social-distancing norms are not compromised.

Also, given some incidents relating to attack on locals by tourists with swords, the District SPs have been told not to allow anyone to come to the state with lethal weapons like pistols, lathis, rods, swords, etc which could be used to create any law-and-order situation.

The Chief Minister said the tourists are welcomed to the state but they must also behave responsibly and adhere to Covid norms given a possible third Covid wave.