Number Of Ministers Has Increased Not Covid Vaccines: Rahul Gandhi Hits Out At BJP 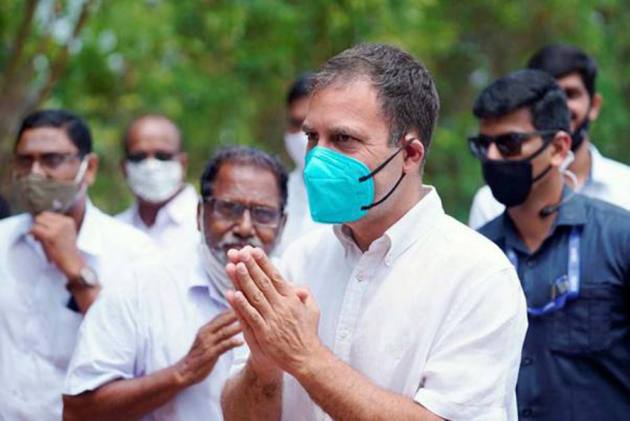 Lashing out at the BJP over the Covid-19 vaccination drive in India, Congress leader Rahul Gandhi on Sunday said that while the number of Union ministers has increased, there’s been no spike in the number of coronavirus vaccines available in the country.

"The number of ministers has increased, not of vaccines," Gandhi said in a tweet in Hindi, using the hashtag "WhereAreVaccines", as he shared a chart illustrating the average number of vaccinations per day.

His comments come in the backdrop of the national capital rapidly running out of vaccines, with less than 80,000 Covid vaccine doses being administered in Delhi on Saturday.

A total of 2,39,850 Covaxin shots and 19,480 Covishield jabs were available in Delhi as on Sunday. The vaccine stock is expected to last a day. The Covaxin jabs are only being used as second doses, the Delhi government said.

Amid these developments, Rahul Gandhi took to Twitter to share a chart of the average vaccinations per day, which are falling short of the target to vaccinate all adults by December 2021.

The chart shared by Gandhi was on India's vaccination equation that aims to stop the third wave of Covid-19.

The chart stated that the target is to vaccinate 60 per cent of the population with both doses by December 2021 and the required vaccination rate per day is 8.8 million.

It also highlighted that the actual vaccination on Saturday (July 10) was 3.7 million, leaving a shortfall of 5.1 million for the day.

The Congress leader also highlighted Mahatma Gandhi's use of oxygen as a metaphor and attacked the government using the hashtag "dissent".

He shared a report that stated why Mahatma Gandhi used oxygen as a metaphor during the freedom struggle and how it has resonance for India today.

The report quoted Mahatma Gandhi as saying that freedom of opinion and freedom of association are "the two lungs that are absolutely necessary for a man to breathe the oxygen of liberty".

The Congress has been raising the issue of shortage of vaccines in the country and has urged the central government to speed up inoculations, saying it is the only way to stop the third wave of Covid-19.

The BJP had hit back at the opposition party by targeting the performance of Congress-ruled states and also accused it of encouraging vaccine hesitancy.