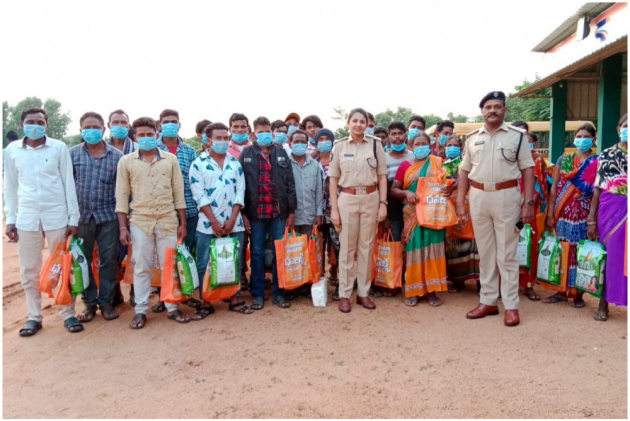 A delegation of elected representatives from 17 villages in the disputed Kotia area in Odisha's Koraput district met the collector of Vizianagaram in neighbouring Andhra Pradesh yesterday and submitted a memorandum to her seeking ‘protection’ from the ‘harassment’ they were allegedly facing from officials of the Odisha government and local politicians. The contents of the memorandum submitted yesterday were reportedly finalized at a meeting of tribals from several villages in the disputed area.

The collector has made light of the developments, saying there is no cause for concern. But when a large number of people from one state meet the collector of a district in another state and express their desire to live in that state is significant.

In big development, people from 3 villages in disputed #Kotia panchayat in #AOB met #Vizianagaram collector with resolve to be in #AndhraPradesh. Collector assured them of all admin help, while @PoliceVzm promised protection.
Kotia has been a dispute between AP& #Odisha since1956 pic.twitter.com/cvIwbUEqvv

Tensions in the region started brewing after Andhra conducted elections in three panchayats – Ganjeipadar, Patusuneri and Phagunseneri. The polls came after the renaming of the panchayats in February this year despite stiff opposition from the Odisha government. The villages are part of a cluster of 28 disputed villages in the Kotia block.

Odisha government officials and police were restricting the entry of officials of the Vizianagaram district and Parvathipuram ITDA into their panchayats, preventing them from accessing Andhra government services, the memorandum submitted by the delegation to Vizianagaram collector A Suryakumari said.

It also alleged that Odisha police have prevented medical staff from entering the villages, seriously affecting health care in their panchayats. Odisha police were coercing villages to stay with Odisha and registering false cases against those who refused to toe the line.

“We are Andhra people. We are happy with the welfare schemes and Navaratnalu scheme of the Andhra government. Therefore, we have passed a resolution to be with Andhra,” The New Indian Express quoted Chodapalli Bishu, a member of the delegation, as saying.

The Collector gave the delegation a patient hearing and assured them of all possible help from the state government. She said she would bring their concerns to the notice of the Andhra government and assured them that they would e provided protection as per the Supreme Court verdict.

Later, the delegation also met Vizianagaram SP Deepika M Patil, who too assured them of all possible help and support in facing the alleged ‘threat’ from the Odisha government. She said a special circle officer had been appointed for the Kotia region and a proposal sent to the government about the possible deployment of armed forces in the disputed area.

Koraput collector Abdal Mohammaed Akhtar, however, said the district administration was not bothered about the delegation meeting the Vizianagaram district administration since it comprised those who took part in the panchayat election conducted in the region by the Andhra government in February this year. The vast majority of people in the disputed territory are aware of all that the Odisha government had been doing for them and solidly behind the state government, he claimed.

The move by the elected representatives comes at a time when the Odisha government is in a proactive mode, dismantling signboards in Telugu put up by the Andhra government in the renamed villages and preventing health officials from the state from administering Covid-19 vaccines to people in the disputed villages.

The dispute has been festering since 1968 when Odisha had knocked on the doors of the Supreme Court accusing Andhra of having encroached into its lawful territory. To back its claim, it submitted three British era notifications of 1920, 1923 and 1927. After hearing both sides, the apex court had asked for status quo to be maintained. The case was dismissed by the top court on March 30, 2006 on grounds of maintainability under Article 131, but with another order for maintenance of status quo till the resolution of the dispute. There the matter has rested ever since.

In February this year, the Odisha government had moved the Supreme Court seeking a stay of the panchayat election conducted by the Andhra Pradesh government in the disputed area. But the apex court had refused to grant a stay and allowed the election process to go ahead.