From viral images of protesters clashing with police to heartwarming tales of collective action and art, the 15-month-long farmers' protests on the borders of Delhi were defined by many iconic moments. 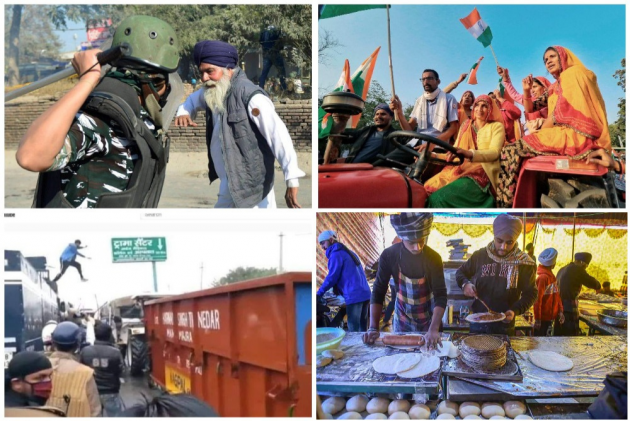 Concertina wires, protest songs and tractors. In the last 15 months, India witnessed a protest like none the country had seen before. Thousands of farmers from states like Haryana, Punjab and Uttar Pradesh took to the streets and blocked roads as they sat in protests against the government for passing three contentious farm laws last year.

On Friday, after over a year of protests and demonstrations across several states, the Narendra Modi government promised to repeal the three laws. The announcement, which came on the occasion of Guru Parab ahead of Assembly polls in several states including Punjab, Haryana and UP next year, brings an end to nearly 15 months of protests at several areas bordering Delhi and other states.

Since August last year, sites like Singhu, Tikri and Ghazipur borders along the capital had been turned into fortresses with nails and concertina wires barricading the farmers out of the capital and forcing them to take refuge outside the temporary borders.

While the farmer protests became a big political issue, with the BJP facing opposition from several sections, including political parties, farmers as well as civil society, the protests also became the centre of cultural activities, social harmony, and camaraderie. Viral images and videos that surfaced from the sites became symbols of resilience and the farmers' grit in the face of adversity.

Today, as farmers and protesters across India celebrate the "half-victory", here is a look at some of the most viral moments from the long-drawn protests that captivated the nation. 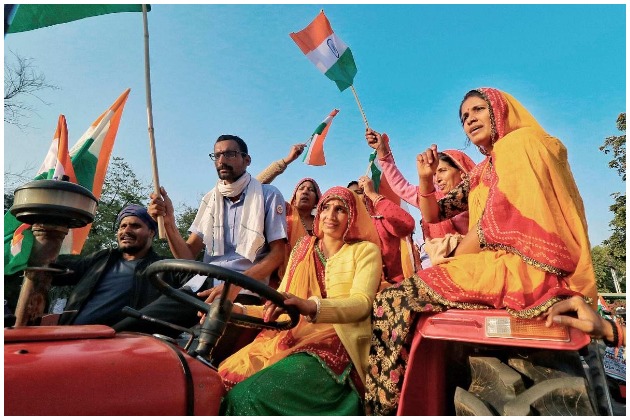 One of the hallmarks of the farmers’ protests was the strong participation of women. Images and videos of women farmers, as well as wives, daughters and mothers of farmers, marching to protest sites on foot and on tractors, went viral in January. Ahead of the 26th January protests in Delhi, several groups of women farmers marched to the capital on tractors as a mark of protest. Reports ahead of the march said that farmer organisations like the BKU were giving driving lessons to women in order to prepare them for the rallies.

These women will not be intimidated by misogynist Indian BJP government.

On March 8 this year, as many as 50,000 women farmers joined their male counterparts at Singhu to protest against the farm laws. The participation of women brought to the limelight the often-invisible role women play in Indian agriculture. 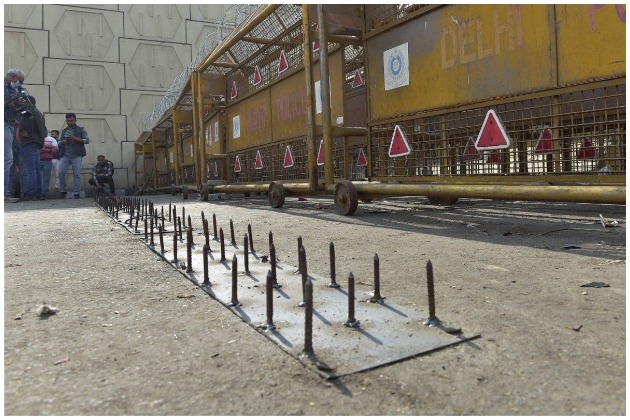 Since the beginning of the protests, security forces tried out several methods to force the farmers out of the protest sites in Singhu, Tikri and Ghazipur border.

Videos and images of nails being driven into the ground at the Tikri border to stop protesting farmers from entering Delhi led to widespread outrage. According to reports, the digging of nails disrupted the water supply to protest sites. Protesters responded by installing makeshift water pumps and geysers. Heartening images of farmers planting trees in response to the nails also went viral.

'You put nails in our path but we will give flowers to you.'

Indian farmers protests are one of the peaceful protests ever. #IndiaSupportsChakkaJaam pic.twitter.com/CpxSp4SgTg

Images of police officers standing with metal lathis and firearms also caused outrage. The images surfaced in February after reports of a police officer getting injured in a scuffle with an alleged farmer protester wielding a sword. 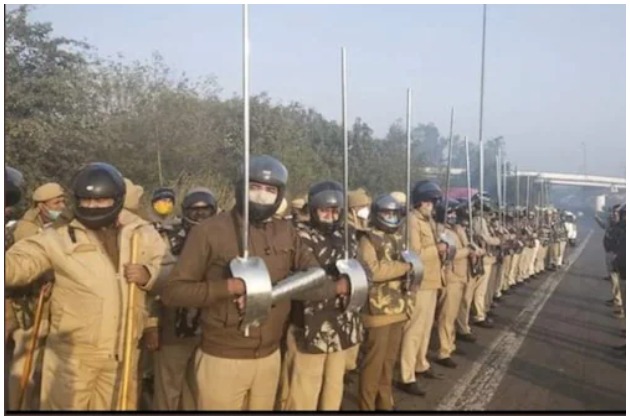 Delhi Police, however, later clarified that no such formal order to carry metal lathis was given and that police officers on duty took the step on their own. The lathis were not seen again.

Several images became the faces of the farmer protests. From an old farmer being threatened by a baton-wielding CRPF officer, to a young protester jumping across tractors, Bollywood style, to shut down a water cannon tanker being used by police to control protesters. These images went viral, making these people the ‘faces’ of the viral protests. 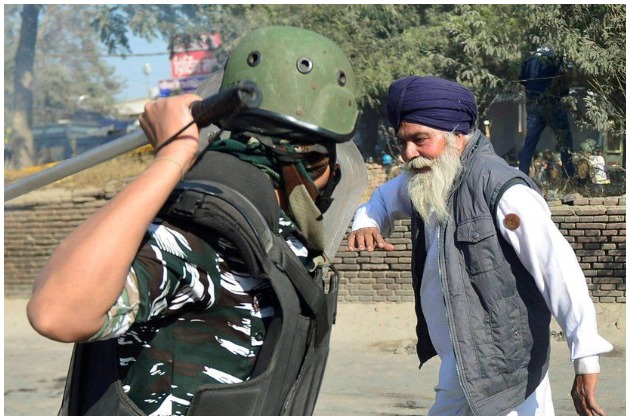 The man in the first photo, 60-year-old Sukhdev Singh, later told the media that he had received several injuries in December after he and other farmers were stopped by the police from entering Delhi via the Singhu border. The image went viral globally and drew the world's attention to the farmer protests. The image also led to a political slug-fest, with several Opposition leaders attacking the BJP government for using force against unarmed and aged protesters. 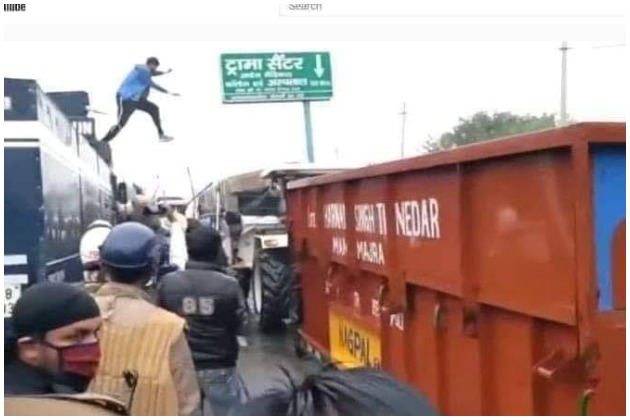 (A young protester Navdeep Singh jumping from vehicle to vehicle to turn off the water cannon | Image credit: Twitter/@awantikatewari)

The second viral image showed 26-year-old Navdeep Singh, the son of a farmer leader from Ambala, jumping from the roof of a tractor to the roof of the water canon vehicle in order to turn it off. The man was later charged with murder.

Several makeshift school were set up by protesters as well as volunteering organisations across the sites at Singhu, Tikri and Ghazipur. In January, volunteers set up a school along the Singhu border to allow children of protesters and farmers camping at the site to continue their education. The school was set up inside a tent and by end of January, nearly 200 children were attending classes at the protest site. Protesters, farmers, as well as volunteers from all walks of life, were free to come and give lessons to the underprivileged children.

Similar schools cropped up at Tikri as well where volunteers of a group called Kisan Social Army set up a school for teaching underprivileged kids of the area. 'Sanjhi Satth' stalls were set up across sites by volunteers, teachers, authors and educators. The stalls soon turned into centres for learning.

With our volunteers at Sanjhi Satth at Singhu. Within 2 days, the Satth has become a school, a library, a forum and a site for donations. Art performances to start soon. Plans underway to expand the current site & setup another at Tikri.

Do visit us to get a taste of revolution. pic.twitter.com/ckfzOGtu0l

Mini-hospitals were also set up in Singhu, Tikri and Ghaziabad to bring relief to protesters this year. A six-bed emergency medical unit, for instance, was set up at Tikri in February by an NGO to attend to the medical needs of farmers.

5. No Farmers No Pizza

Even as protesters focused on maintaining pressure on the government, the protests sites became places of cultural and social harmony and bonding. And one of the most important agents of bonding was food. With thousands of farmers setting up temporary homes across Delhi's border areas, several gurudwaras and NGOs as well as farmers themselves pitched in to provide healthy and clean meals to thousands of protesters. Roti and bread-making machines were brought in to facilitate the preparation of large portions. 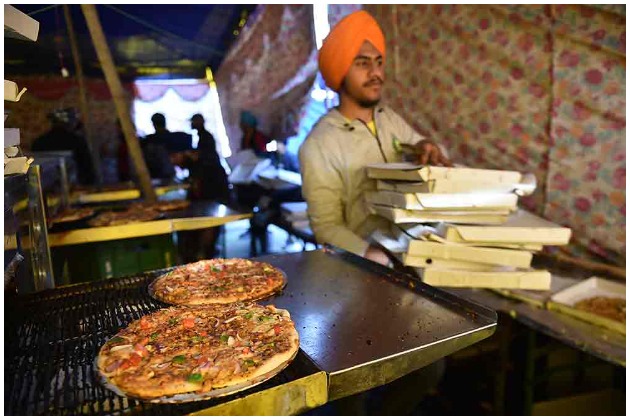 While the communitarian preparation and serving of food, langar style, won hearts, protesters were also trolled over food. Images of protesters being served biryani led many to accuse the farmers of being "anti-national" and "paid protesters" who were only participating for a plate of biryani.

Protesters were also trolled for hosting "pizza parties" at protest sites in an effort to malign the movement. Farmers responded by claiming that every bit of the pizza or any kind of food being served at the protest sites was made by farmers themselves using ingredients that were also grown by farmers. #NoFarmersNoPizza hashtag also became a popular slogan against food politics.

A musician's Punjabi rendition of the popular Italian song ‘Bella Ciao’ became viral. The song, which regained popularity in pop culture last year after being used in the hit Netflix series 'Money Heist', was adapted by musician Poojan Sahil into Punjabi. The song became one of the war cries of the protest with sites blaring it on full volume.

As the protests continued all through this year, protest sites turned into a melee of cultural activities and art.

At Singhu border, a school set up for seniors where colouring books are used as a form of therapy ðÂÂÂÂÂÂðÂÂÂÂ½

Libraries and free reading corners were set up across sites to impart knowledge to protesters regarding the reason and origin of the protests. Efforts were also made to educate protesters about farmers' issues and demands.