Another former minister too set to join BJP in Delhi today; Rana says his move is aimed at defeating votaries of the 'Nixon Plan' that envisages splitting Jammu and Kashmir. 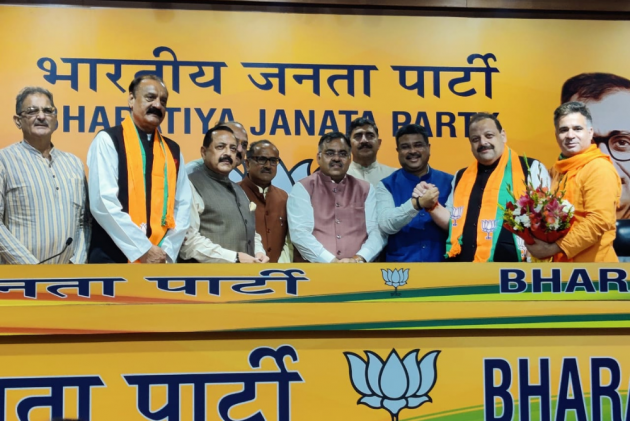 Davinder Singh Rana, the National Conference’s Jammu province president and a close aide of former chief minister Omar Abdullah, has resigned from the party, and is set to join the BJP in what is being seen as a big shift in the region’s political balance.

Besides Rana, another NC leader and former minister Surjit Singh Slathia will also join the BJP on Monday in New Delhi in the presence of top party leadership. BJP leaders of J&K will be present in New Delhi during the ceremony. Union minister of state in the Prime Minister’s Officer (PMO) Dr Jitendra Singh, who is the brother of Rana, will also be present at the joining ceremony.

NC president Dr Farooq Abdullah on Sunday evening accepted the resignation of Rana and Slathia without passing any comment. Rana is a three-time legislator and served as the political advisor to Omar Abdullah when the latter was chief minister of J&K.

“Nothing will deter me in realising this objective and I will single-mindedly work for it even at the peril of my political career,” Rana said, adding that the Jammu Declaration is a way forward to respect the urges and aspirations of all the regions and sub-regions of Jammu and Kashmir with none being discriminated against or dominated politically, socially and economically. Rana said he was confident that the Jammu Declaration will eventually lead to offset the fault-lines created between the regions, various segments of society, as also with the rest of the country.

“The trust deficit of decades is, therefore, needed to be bridged for ensuring harmony and unity between peoples, the regions and the sub-regions in this part of the country.”

Unofficially, NC has dismissed Rana’s resignation as a non-event. “He (Rana) should first clear who has come up with a Dixon Plan idea recently for which he says has launched what he calls the Jammu Declaration,” says a senior NC leader pleading anonymity.

He says the NC will not suffer in Jammu on account his departure from the party. “We have strong and tall leaders in Jammu. Rana wanted to leave the party and needed some justification and hence came up with his own idea of the Jammu Declaration. We wish him good luck,” he says.

Rana said the Jammu Declaration is a roadmap to defeat the votaries of the Dixon Plan who want to divide the Jammu region on the basis of religion. Rana’s ideas have many takers in Jammu. Sir Owen Dixon, the U.N. Representative who came to the subcontinent pursuant to the Security Council’s 1950 resolution on the Kashmir dispute, is remembered by people of Kashmir nostalgically and his ‘Dixon Plan’ is still talked about. Dixon plan assigned Ladakh to India, the Northern Areas and Pakistan-Occupied Kashmir (POK) to Pakistan, split Jammu between the two and envisaged a plebiscite in Kashmir Valley.