National Conference leader Omar Abdullah hit the road and held multiple rallies in Jammu in a first since the abrogation of Article 370 despite no elections in sight in J&K. 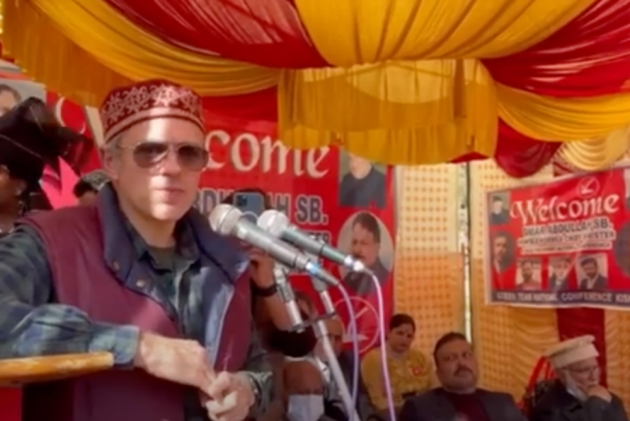 Former Chief Minister and National Conference vice president Omar Abdullah’s criticism and condemnation of like-minded allies like the People’s Democratic Party, Congress and opposition BJP and J&K administration in his roadshows has raised a storm. Abdullah however seems unrelenting.

"Don’t get frightened by the intensity of opposing violent winds, O’ Eagle,

They blow only to help you fly even higher.'

Omar and former Chief Minister Ghulam Nabi Azad are holding separate and fairly big rallies in Muslim dominated regions of Chenab Valley and Pir Panchal regions of Jammu respectively at a time when elections are not in sight in J&K. However, both have a different political angle.

The rallies are seen as significant in J&K as it is the first time after the abrogation of Article 370 that mainstream political parties are being allowed to reach out to people. Earlier only the BJP could hold public rallies or programs in J&K.

Omar’s speeches show that the NC vice-president is out to project his part as the only pan J&K party having bases both in Kashmir and Jammu. His speeches also demonstrate that National Conference is unlikely to ally with other like-minded parties during Assembly elections if ever they are held in J&K. Since the dissolution of the Jammu and Kashmir Assembly in 2018, the Election Commission of India hasn’t announced Assembly polls in J&K.

“Had we not lost elections (in 2014). Had there been National Conference government, Article 370 wouldn’t have been abrogated, Article 35A wouldn’t have been touched, no one would have taken your land back that you acquired through Roshni legislation, recruitment orders of your children wouldn’t have disappeared, outside contractors wouldn’t have taken over J&K. What to do? They took benefit of our weaknesses,” Omar said addressing a rally at Chatroo in the Kishtwar district of Chenab Valley on Tuesday.

People’s democratic party senior leader and former minister Nayeem Akhter said he doesn’t know on what basis Omar Abdullah gave such statement but PDP has always tried to be the voice of people. “PDP took an initiative in People’s Gupkar Alliance(PAGD) in order to stand unitedly with all the political parties and be a voice for the people of Jammu and Kashmir. PDP at this time doesn’t have any interest in arguing with any political parties. After the abrogation of article 370 on august 5th 2019, the situation has worsened in Jammu and Kashmir. In these uncertain times for the state, there is no scope of internal rivalries,” Akhtar says.

Omar also hits hard at the administration led by Governor Sinha and says there is no place in Kashmir where one feels safe. “All those areas which were militancy free in 2012, today we see militancy in those areas,” Omar said in the Baderwah area of Doda on Wednesday. He said in Srinagar during his government around 40 bunkers were removed. “Today they have not only brought bunkers back but even started taking over town halls and marriage halls for security forces,” Omar said. He said after the removal of 370 no industrialists has come to Kashmir and thousands of youths have been subjected to unemployment.

The rallies including of Azad have unnerved Lieutenant Governor Manoj Sinha. Sinha responded from Kolkata, where he is on visit currently, saying only the parliament can restore statehood to Jammu and Kashmir. Sinha insisted Assembly elections will be held after the completion of the delimitation process.

Lashing out at Congress in Kishtwar, Omar said, “We were expecting that some parties will join their voice in ours. They remained silent. I felt sad when I read Ghulam Nabi Azad’s sahab statement that talking about Article 370 is waste of time. I respect Azad sahab. But I must tell you that if Article 370 is our inheritance, it is also Congress’s inheritance. Article 370 came into existence because of the first prime minister of the country Jawaharlal Nehru. If Congress is not willing to speak for its inheritance, then how can they speak for others,” Omar said. “Our case is still in the Supreme Court and we have a strong case. Our future and everything including the future of our children and our land is associated with Article 370. Had there been no Article 370 there wouldn’t have been exemplary land reforms of land to the tiller,” Omar said. He said National Conference will single-handedly continue its fight for the restoration of Article 370 if Congress is not ready to fight this battle.

In another rally, Omar accused the BJP of “murdering democracy” in the Jammu and Kashmir, after the abrogation of Article 370 by rendering institutions, including newspapers weak and feeble. He said BJP has rendered “hollow” India’s slogan of being the biggest democracy in the world.

He called Omar “establishment’s beloved boy” and said he belongs to the party that has all along stuck to power.

“They stuck power when the BJP rejected their autonomy resolution. Propriety demands they should have resigned. Article 370 was removed by the parliament and their (NC) members were laughing at that time when it was abrogated. Now he (Omar) says had we (NC) been in power they would have done this or that. They wouldn’t have done anything,” he said.

He, however, said Article 370’s demand will not die and it will be restored. National Conference hasn’t responded to the PDP and PC so far.